Under attack. What and when Russia shelled in Ukraine

This is an interactive map. By clicking on the legend, you can choose the type of shelling: artillery, rocket, or air shelling, while by hovering the mouse over a specific point, you can get the details: the date of the shelling, its location and coordinates or the reference link. Underneath the map, you can also choose a specific time range by moving a slider to the right or left. If you click on the blue rectangle, you can see a satellite image showing the destruction caused by the shelling.

Choose the type
of shelling:

Satellite images. Click to zoom in on the highlighted area

On this interactive map, you can see fragments of satellite images taken after 24 February. The images were obtained from planet.com which kindly provided us access to their database. The images detail the consequences of shelling in towns and villages that were either partially or completely destroyed by the Russian forces.

The most visible are the signs of damage to the large structures: 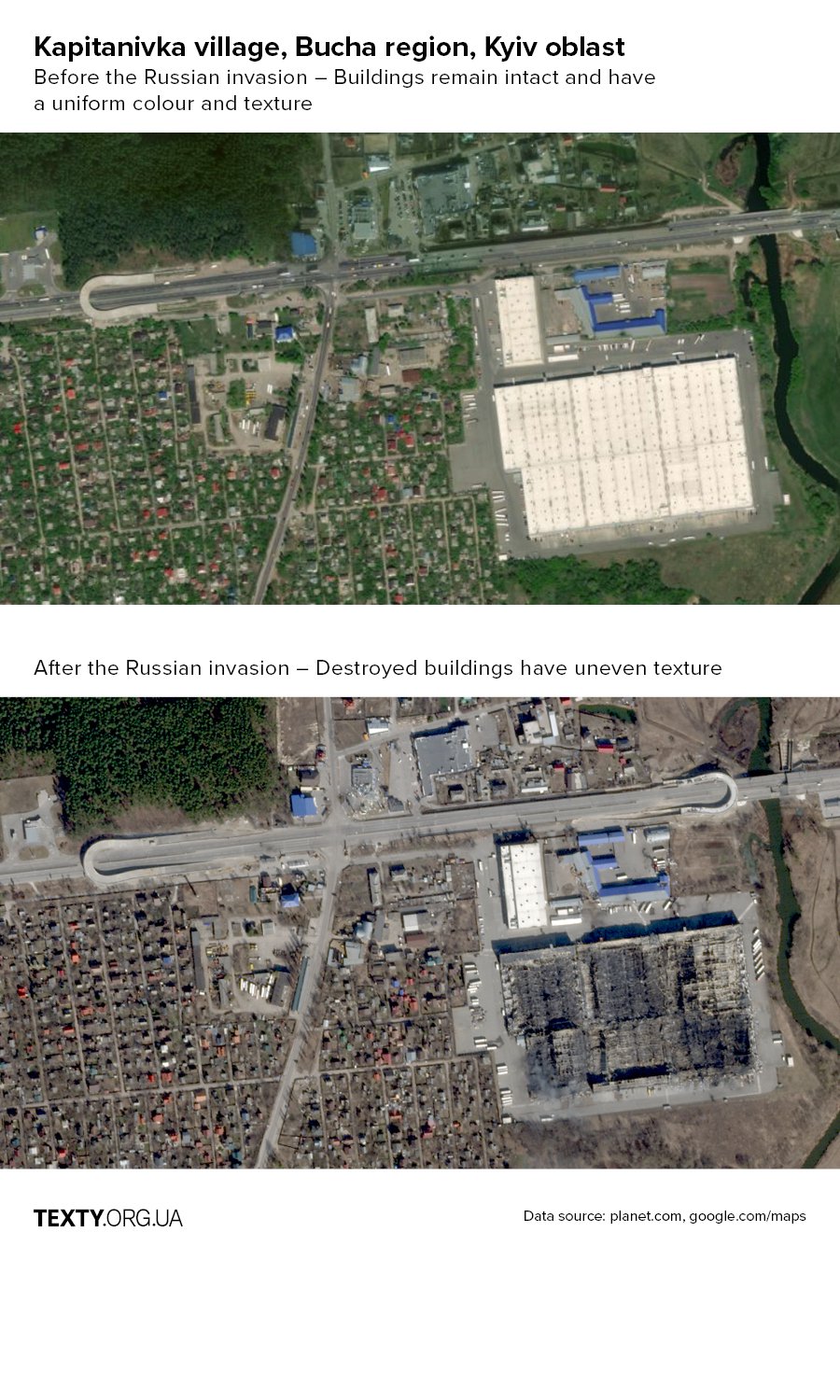 Traces of shelling are also visible in the fields: 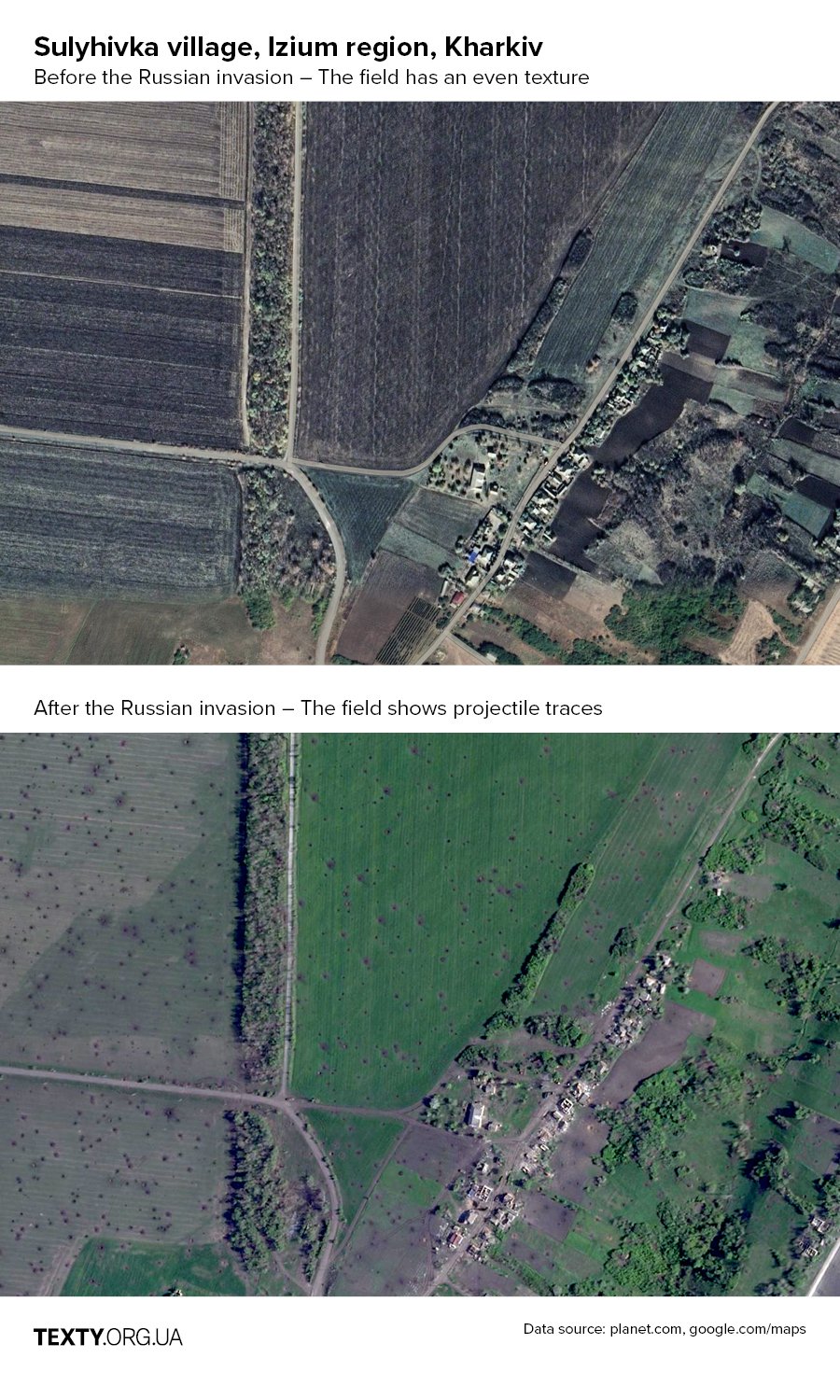 Ruined residential buildings often seem to look like lattices. This is how buildings without the roof are shown on the satellite images when only the walls inside remain visible. 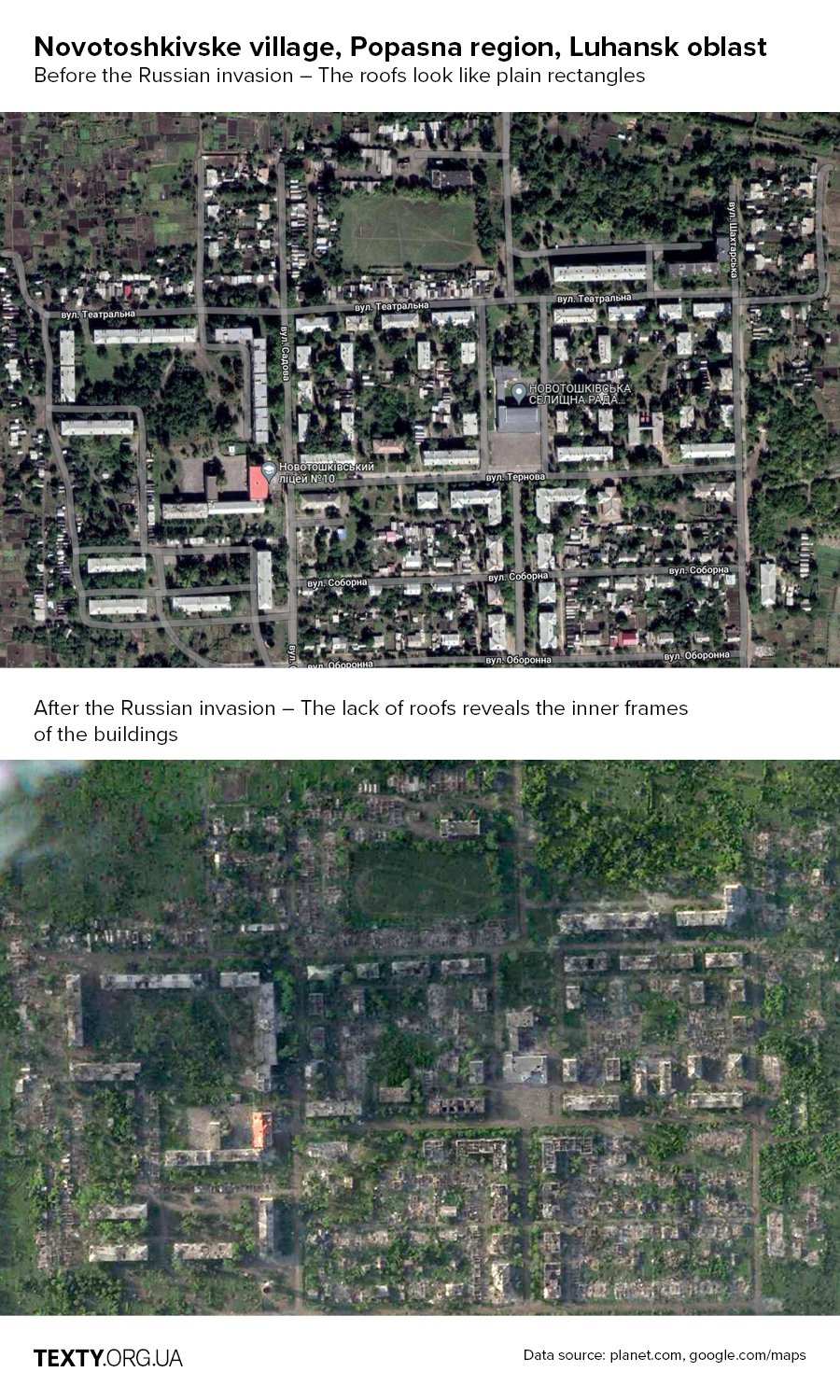 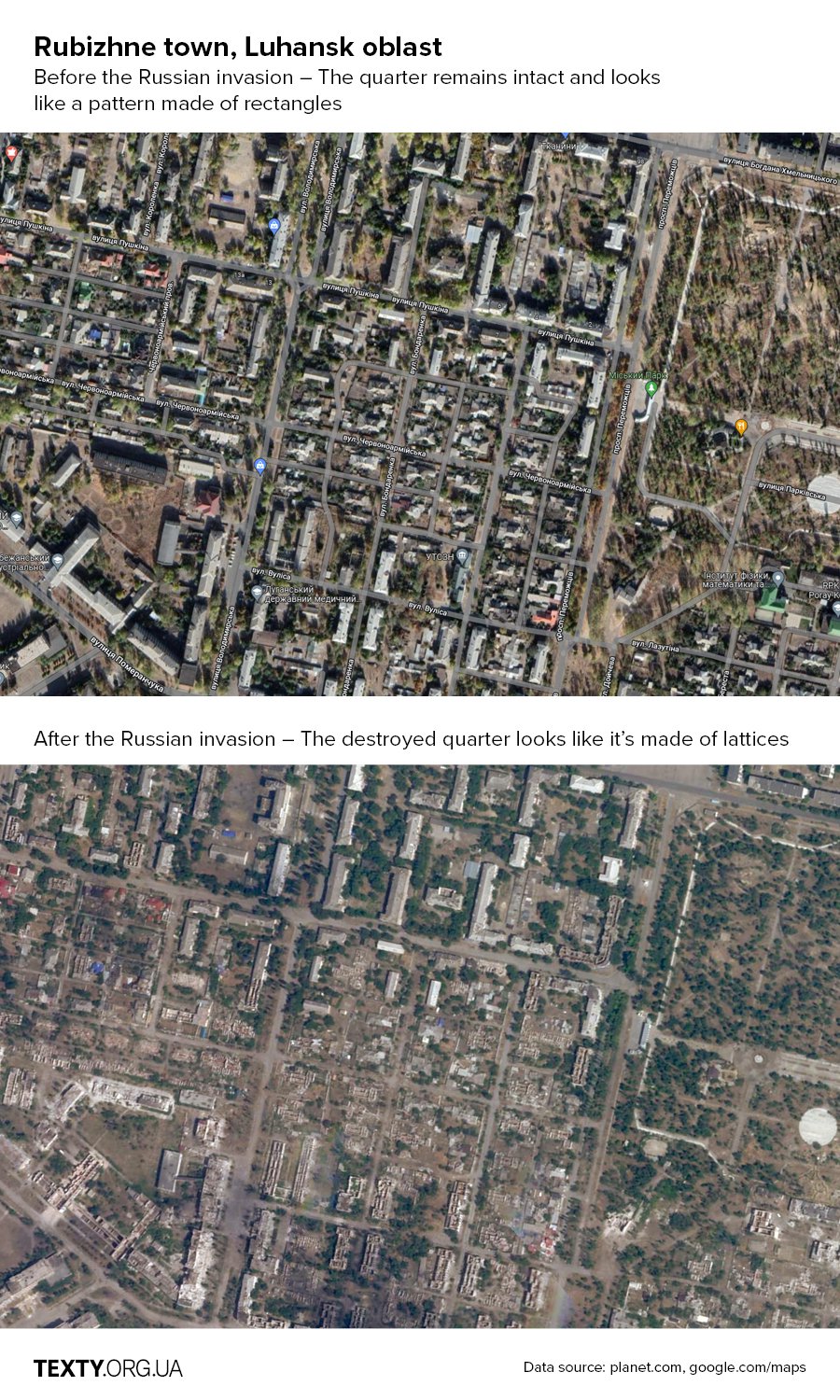 Due to the destruction, in some small private houses, not even an internal frame was sometimes left. After being hit with projectiles, they got unclear contours. 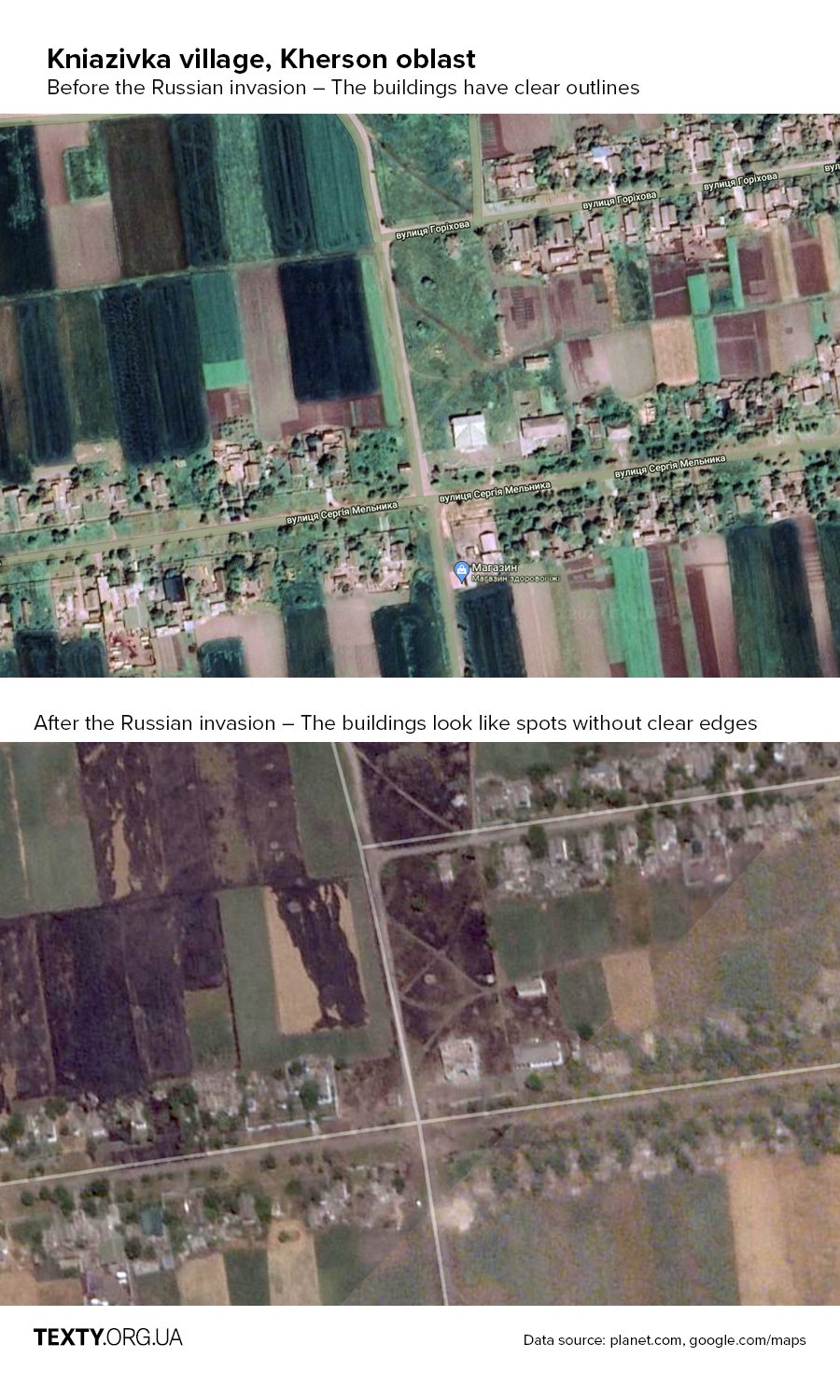 In addition to the interactive map that is being constantly updated, this project also includes graphs showing the frequency of Russian shelling mentioned in the news. We grouped them into three above-mentioned categories for the entire period and with the monthly breakdown detailing the intensity of shelling in the regions of Ukraine.

Choose the type
of shelling 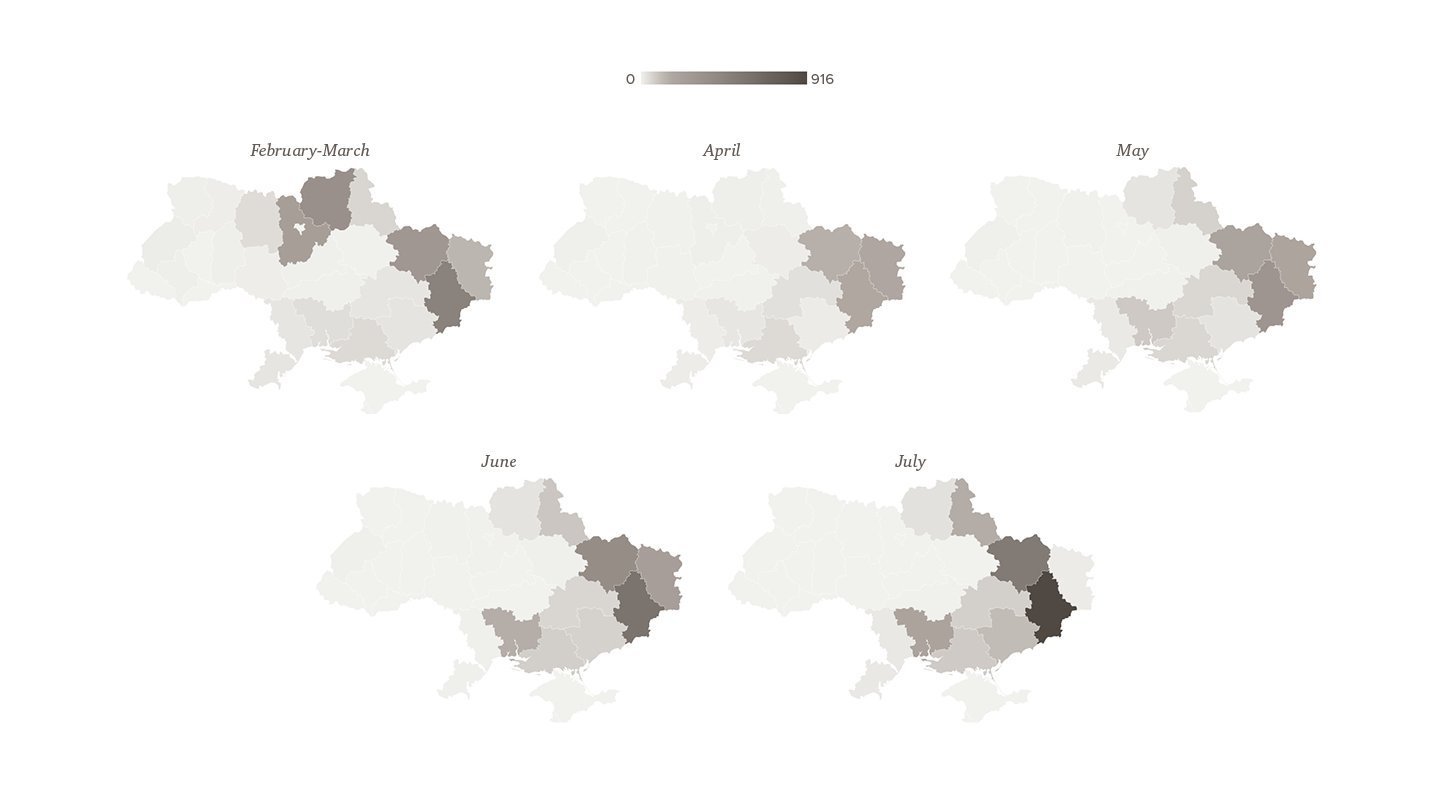 Choose the type
of shelling

The map and the graphics do not reflect the real situation 100% since we do not have all the comprehensive data about the shellings. If you know an address or a street in your village or a city that has been shelled and would like to help us collect data detailing the level of destruction of civilian objects and the infrastructure, please send us a message at texty.org.ua@gmail.com.

We will treat the information you provide responsibly and will only share it in a way that does not pose a threat to the remaining buildings, taking into account the recommendations of the Ministry of Defense of Ukraine.

We started collecting data for this map on 24 February when Russia launched its full-scale invasion of Ukraine. At that time, we focused on comparing the cities that have been mentioned in the news after being hit by the Russian missiles with the map of fires to determine the locations and the extent of the damage. As the shelling continued, we developed a table that is still being regularly updated.

It is based on the information about Russian shelling in Ukraine shared in the news. In the first days, there were several sources of information such as the leading news sites, including the local media. However, the information in there was always duplicated, so in a few weeks’ time, we decided to continue monitoring only www.pravda.com.ua/news. Some data also came from verified eyewitness reports (i.e. friends and relatives). Although those fewer instances mostly did not have a link to the source, we still marked the coordinates as the accurate ones.

As for the data extracted from the news items, the algorithm was as follows: we listed the names of all settlements that were shelled. We then checked them all against the corresponding date on the fire map. If we saw a fire that day, we indicated its coordinates in the table and marked the entry as accurate. In most instances, fires recorded on NASA satellite maps corresponded with the locations of shelling.

If the fire was not recorded and the news did not specify the location of the shelling, we simply marked the coordinates of the settlement (provided by Google maps) and indicated them as inaccurate.

All the strikes are divided into three groups: rocket strikes (along with the air launches), air strikes (projectiles and bombs dropped from aircraft, helicopters and drones), as well as artillery (either barrel or rocket), mortar and tank strikes.

This project gives a general overview and does not aim to show absolute accuracy since some instances of shelling were not mentioned in the news. Furthermore, the list of settlements that the General Staff of Ukraine mentions daily in its reports was not included from the first day of Russia’s full-scale invasion.