Since the beginning of the war, Russia has been stealing Ukrainian grain from occupied territories, exporting and selling it to countries not involved in the conflict. This has been repeatedly stated by Ukrainian and foreign high-ranking officials. We compared data on Russian exports, ship traffic and satellite images.

We obtained the data for our analysis from unofficial sources, which may be incomplete. However, we compared data from two separate sources, and their dynamics show the same trends. As such, we decided to publish them with some reservations.

When Russia started the war in Ukraine, many countries stopped importing grain from Russia. It is currently unknown how the situation will develop further. But as the chart below shows, in March 2022, the number of countries buying Russian grain halved compared to January and February. However, this did not much affect the overall volume since all the main importers — Turkey, Egypt, Iraq, Saudi Arabia and others — continue to receive shipments from Russia.

The countries that "dropped out" accounted for a small share of exports — no more than 15-20%.

In April 2022, this lost share was made up for, in particular, by "gray freights", i.e. ships that left the port without providing a specific destination. We spoke to some experts, who noted that Russian vessels turn off trackers to conceal the route of such ships. These "gray cargos" very likely carry stolen Ukrainian grain. Their share increased significantly in March, and in April, it reached 22.7% of all grain exported by Russia. The total amount was almost 650,000 metric tons, which roughly matches the amount of stolen grain claimed by the Ukrainian authorities (400-500 thousand metric tons).

Sevastopol, a city of the stolen

Ukrainian grain exporters predict that Russia exports stolen grain from Sevastopol through the Avlita terminal (which Ukrainian oligarch Rinat Akhmetov built before the occupation of Crimea to export metal and grain). We decided to verify this statement by using open sources.

CNN recently published pictures made by Maxar, which show the ship being loaded with grain in the port of Sevastopol.

After the beginning of the invasion, the nature of transportation from Sevastopol changed. Russia also used to transport grain from Sevastopol, but these were mostly small shipments to Russian ports, including the Caucasus port in the Kerch Strait. Large amounts of cargo were sent to Turkish ports.

But in March and April, Russia increased traffic from Sevastopol, and from there, the filled ships went to Egypt, Libya, Lebanon and Syria.

Earlier, the media reported that the stolen Ukrainian grain was delivered to Syria on the ship "MATROS PAZYNYCH".

We also looked at satellite images of Sevastopol. The pictures show an increase in grain shipments near the Avlita terminal. Last year's photos consistently showed an absence of crowding of freight trucks near the port. But in April 2022, the number of trucks increased dramatically, and loaded cargo vessels began to regularly depart from the port.

The slider below is a picture from April 2, 2022. The photo on the right shows trucks and train wagons. Move the slider from left to right to see what they look like in the photos.

Trucks are highlighted in blue, wagons in red, and ships in green. 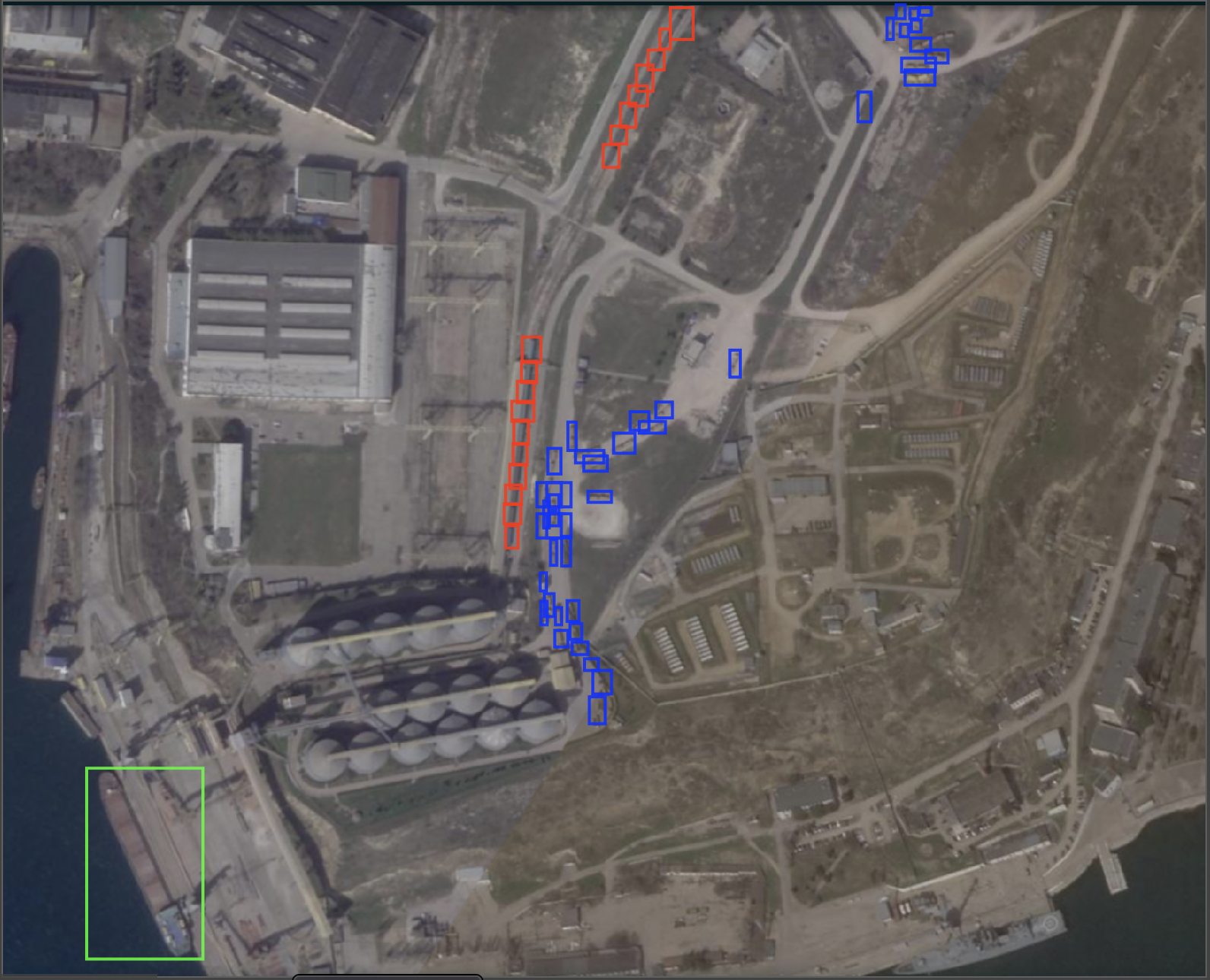 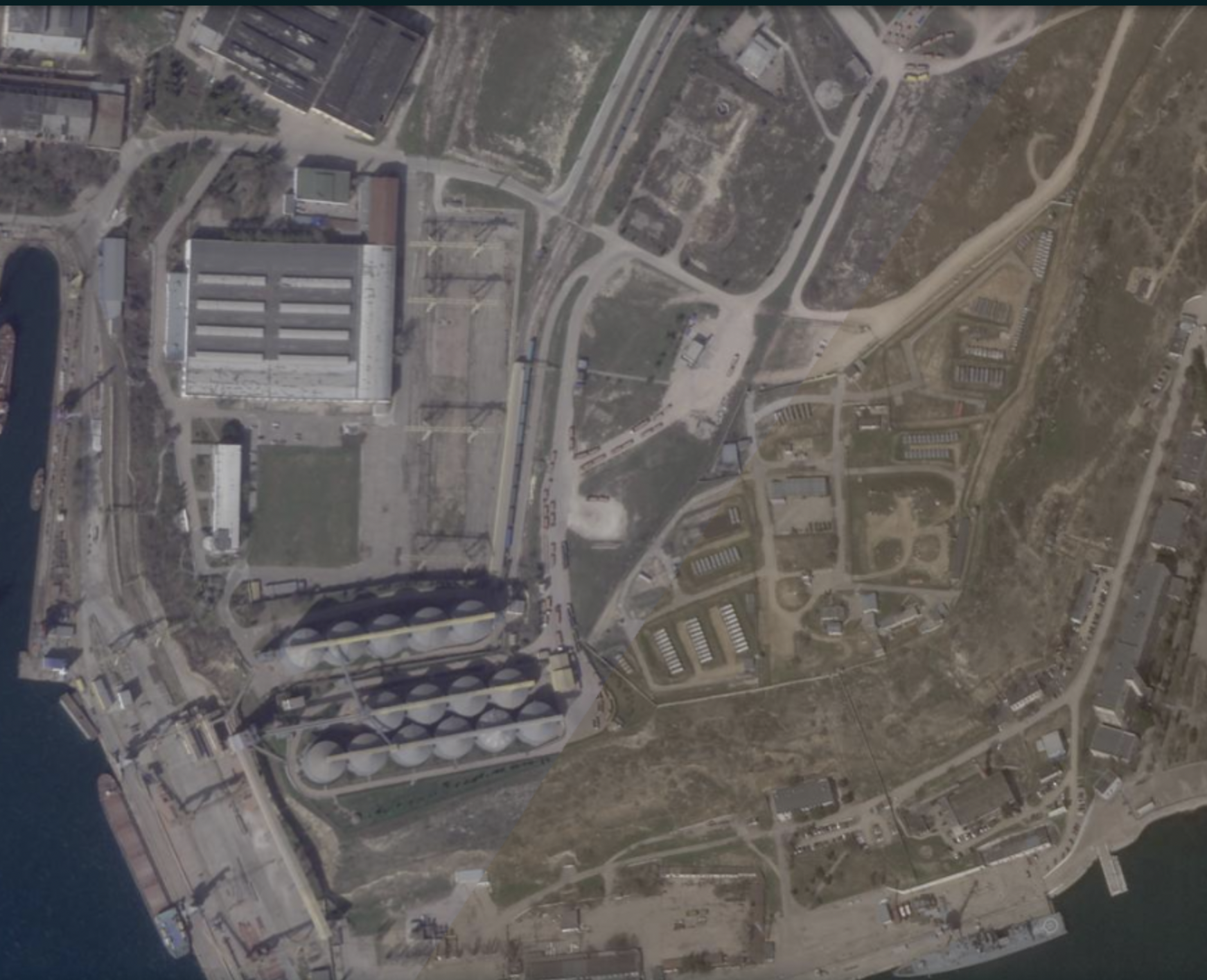 These images from Planet Inc below show an overview of the recent situation where you can see in detail trucks and wagons. For a better overview, images can be zoomed in on using the buttons.

One full truck contains about 40 metric tons of grain, while a grain wagon holds 65-70 metric tons. The graph below shows the days for which images of good quality made in cloudless weather are available. This way we counted the transport that arrived at the port, which can be seen in the satellite images, from which we also roughly determined the amount stolen.