Disinfo from Russia. Issue #12. Zelensky is not worthy of a meeting with Putin. Poroshenko will set his house to fire as Gontareva

Monitoring of topics of Russian disinformation. Disinformation sites continue to proactively argue that Ukraine opposes peace and ignites the war. They also remind how everything is bad within the country: the draft of the budget is anti-social, Zelensky uses Poroshenko's methods, and Poroshenko is doing everything to defame the JFO veterans and plans to stage the attack on himself, as Gontareva did. In international relations, Ukraine continues to be called the bargaining chip. OPFL (Opposition Platform for Life party) representatives help disinformers to promote this thesis. 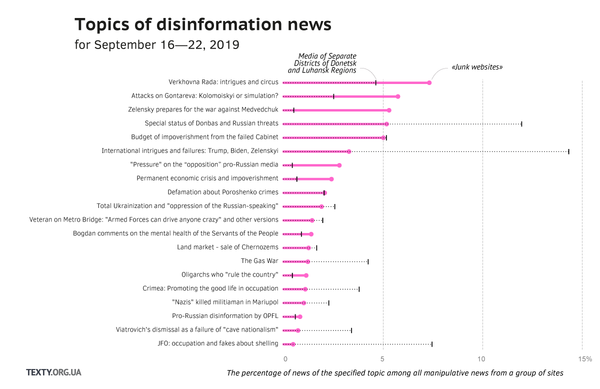 The flow of disinformative publications about Ukraine's failure to comply with the Minsk agreements continues. It primarily focuses on holding local elections in the SDDLR and granting special status to the region, which involves corresponding amendments to the Constitution. Ukrainian manipulation sites claim that improving the situation in the Donbas is impossible. Outlets from the occupied territories produce a flood of accusations of political leaders and parties that they do not benefit from returning the Donbas "without repression and terror." They even came to the point that pro-Ukrainian politicians “produce ideas about depriving the inhabitants of Donbas of electoral rights, placing them in concentration camps and returning rights only in the case of complete loyalty to the hateful totalitarian ideology of Ukrainian Nazism”. The flow of disinformation is also being augmented by the theses on the military path chosen by Kyiv to return its territories and that Zelensky does not "deserve" a meeting with Putin.

The Cabinet of Ministers was criticized this time for its anti-social draft of the budget. Both in occupied territories and on Ukrainian sites a disinformation thesis appeared that "thousands of hryvnias for defense and pensions will be collected from all Ukrainians".

The attacks on Gontareva and the arson of her home were distorted as a crisis and discord in Poroshenko's (“in a criminal gang”) camp. The arson was allegedly organized by Gontareva herself to seek political asylum in Britain. They predicted that Poroshenko would go the same way and would stage a political massacre.

Media from occupied territories particularly celebrated the dismissal of Vyatrovich. He was called "the main rabid ideologist of Ukrainian Nazism." He was credited with reducing Poroshenko's rating, the conflict with Poland, and swallowing significant budgetary funds.

When talking about publications that can be called Medvedchuk's PR, we often saw identical headlines circulated on numerous sites. This time, such headlines we: “Putin - Medvedchuk: You use our good relations to realize the interests of Ukraine and its citizens” and “American Institute for the Study of War: Zelenskyi is preparing for war against Medvedchuk”. We did not find any links to the source on any of the sites that published this piece. The main idea that was constantly being reproduced — Zelenskyi is looking for ways to put pressure on Medvedchuk and that he never "hides his hostility and jealousy to Medvedchuk”. Because, according to a meme that terrorist media is trying to spread, Medvedchuk is now becoming Zelenskyi's only significant competitor.

Disinformation media continue to cover the topic of "pressure" on the opposition, namely pro-Russian, media. As in previous issues, they say that Zelensky is allegedly continuing to use Poroshenko's methods and trying to shut down TV channels that "call for peace in Ukraine". Separately there is the idea promoted that Zelensky, on the contrary, should be interested in the activities of these channels, which alone do not call "betrayal" all attempts to achieve peace within the framework of the Minsk Agreements.

Two main ideas are actively promoted in the geopolitical sphere. The first topic concerns any actions by Ukrainian diplomats which are distorted as attempts to delay peace at any price. For example, the PACE boycott is a self-isolation of Ukraine and a lost chance to negotiate not only in presidential phone calls or meetings of the Donbas Contact Group. It is argued that it is because of diplomats' actions that "dialogue between Russia and Ukraine is virtually terminated". In this way, Russia is trying to undermine the credibility of Ukrainian diplomacy.

The second idea is that Ukraine is too weak a player in the international field. It is promoted by framing the actions and words of international political leaders. In support of this thesis, for example, Donald Trump bows to friendship with Moscow, and "no one cares" about Ukraine. OPFL also contributed to the spread of disinformation on geopolitical matters. Rabinovich's thesis on the external influence of Soros was actively picked up and used by disinformers.

The incident on the Metro Bridge in Kyiv, which was blocked by a JFO veteran, and initially police thought he wanted to blow up the bridge, prompted a flow of disinformation and speculation. Bridge mining was deemed staged, but the versions of the motives were different. Does Poroshenko want to expose JFO veterans as "psychopaths"? Perhaps a plot belongs to Avakov personally and the result is the veterans' permissiveness (“caste of untouchables”)? Or was the staging meant to reduce the popularity of the Svoboda party? This example proves that an event that goes beyond the ordinary existence of Ukrainians, from a boat with watermelons to the threat of a terrorist attack, in the interpretation of disinformers turns into complete #zrada(betrayal). The flow of contradictory versions of the event is a well-known (pdf file, p.8) tactics of Russian disinformation.

"Kyiv will continue to make statements with absurd excuses": in the Russian Federation commented on the negotiations in Minsk | replyua.net

“A worthy end to Ukraine”: Zhirinovsky called the cause of the “collapse” of the country | replyua.net

Zelensky proved that he is not worthy of meeting with Putin | e-news.su (terrorists media)

Budget of impoverishment from the failed Cabinet

Ivan Krulko: “The draft of state budget does not provide for economic growth and raising social standards” | odessamedia.net

Medvedchuk: “Opposition Platform - For life” will not support such an antisocial budget | dneprcity.net

Boyko: “Opposition Platform - For Life” is preparing an alternative draft of the state budget 2020, which provides for a reduction in tariffs and an increase in social payments | newsmir.info

The economic policy of Ukraine astride on scooter and with a smartphone in hand | rusnext.ru (terrorists media)

Thousands of hryvnias will be collected from all Ukrainians for defense and pensions, science is ordered to die - draft of budget 2020 (VIDEO) | rusvesna.su (terrorists media)

The new budget of Ukraine: the owners of the colony are satisfied with the occupation administration | rusnext.ru (terrorists media)

Zelensky prepares for the war against Medvedchuk

Putin to Medvedchuk: You use our good relations to realize the interests of Ukraine and its citizens | for-ua.life

American Institute for the Study of War: Zelensky prepares for war against Medvedchuk | from-ua.com

Medvedchuk: It is unfortunate that the current government is trying to destroy freedom of speech in Ukraine | from-ua.com

The status of autonomy for Donbass will not change the status of Ukraine as a unitary state, - Medvedchuk | naspravdi.info (terrorists media)

Viatrovych dismissal as a failure of "cave nationalism"

"Opposition Platform - For Life": Change of leadership of the Institute of National Remembrance - a chance for nationwide dialogue and reconciliation | 112.ua

OPPOSITION PLATFORM - FOR LIFE requires the authorities to guarantee the linguistic rights of Ukrainians | bessarabiainform.com

The most important of our arts is ... "Viatrovych Institute"? | newsmir.info

Ukraine was deprived of national memory ... named after Viatrovych. What did social networks discuss on September 18 | ukraina.ru (terrorists media)

Quarreled Ukraine with Poland and undermined Poroshenko rating: what Viatrovich was remembered for | e-news.su (terrorists media)

Gasparyan about the record amount of money from the budget for Viatrovych: Expect the next non-stop parade of savagery | ukraina.ru (terrorists media)

Well, it started! Viatrovych advises Ukraine to prepare for the collapse of Russia | e-news.su (terrorists media)

Attacks on Gontareva: Kolomoisky or simulation

Gontareva house burned down: how it really was, the scandalous exposure | politeka.net

"Poroshenko is ready to set fire to his hut" | ua24ua.net

Special Gontareva: it’s not the house that burned down, but the barn (video) | u-news.com.ua

Lesev dispelled the ashes after the fire of the Gontareva estate: "This penguin is now sitting in London ..." | znaj.ua

Oleynik about the arson of Gontareva house: "Sow the wind, and now reap the whirlwind" | ukraina.ru (terrorists media)

Golovachev has no doubt that the current authorities play along with Gontareva | ukraina.ru (terrorists media)

Zolotarev explained the hidden desires of the former head of the National Bank | ukraina.ru (terrorists media)

Veteran on Metro Bridge: "Armed Forces can drive anyone crazy" and a bunch of other versions

Mikhail Chaplyga: I read the alleged revelations of the invader of the bridge. 101% banal staging ...! | ua24ua.net

Montyan about the state of emergency on the Metro bridge: It seems that everyone knew very well that there was no explosives there | news247.com.ua

The culprit of emergency on the Metro bridge had no explosives, and he could just was recruited for such a "circus" - Montyan | replyua.net

Indulgence from Avakov: why the head of the Ministry of Internal Affairs of Ukraine need drug addicted terrorists | ukraina.ru (terrorists media)

There is no bottom. How repeatedly convicted junkie captured the bridge in Kyiv and got off with a "hooligan"* [means Article 296 of the Criminal Code of Ukraine "Hooliganism"] | antifashist.com (terrorists media)

"Stab, shoot, explode and you will be forgiven." Why do authorities want to release “bridge terrorist” Belko | nk.org.ua (terrorists media)

We searched for topics in 2526 manipulative news in Russian from 18 propaganda sites and 61 Ukrainian online media, which was revealed more than 10% of manipulative news from all news about Ukraine, total - 81 sites. Manipulative news was determined by an improved classifier from the project "We’ve got bad news!".