Monitoring of topics of Russian disinformation. Issue #11. Forcing to peace and discrediting the land market

Over September 9—15 of monitoring, disinformation about the need for peace at any price has become the most important issue in the occupied territories. The Russian disinformation machine uses the events in Ukraine, reinforces and distorts well-founded warnings about the possible authoritarianism of Zelensky and that the new Verkhovna Rada is like a puppet. As an example, this time they used the dissolution of the Central Election Commission, the adoption of the law on impeachment, and the appointment of a new military prosecutor. Russian disinformers paid much attention to the creation of a land market in Ukraine and, as a consequence, the "death of the Ukrainian farming". As observed in previous monitorings, disinformation from the occupied territories about the Armed Forces, the language and Russian gas continues. 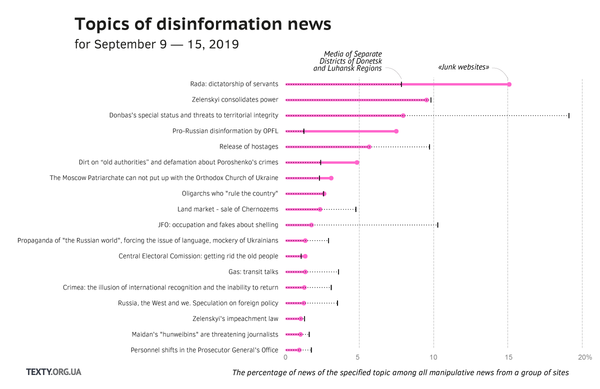 Topics of disinformation news for September 9—15, 2019

Most disinformation materials from the occupied territories were devoted to peacekeeping options in Donbas. The propagandists accused the Ukrainian authorities, led by both Poroshenko and Zelensky, of refusing to end the war. In the topic of peace-capitulation, the message of “external rule”, traditional for Russian propaganda, was also promoted: they say that no matter what Ukraine plans, West can force it to meet the demands of Russian fighters. High attention to this issue, together with a small amount of disinformation on the subject on Ukrainian sites, indicates that it is the capitulation proposals that are most important to the occupiers right now.

The standard scheme of Russian propagandists has confirmed once again — any events in Ukraine are eagerly used as a reason to speak of a "failed state". This time Verkhovna Rada is determined to be a puppet, incompetent and, henceforth, authoritarian. MPs elected in first-past-the-post voting are told to be unhappy with the "too rigid discipline" in Servant of the People parliament group. Also, there has been much discussion about the rapid pace of adoption of bills. Both Ukrainian manipulative media and disinformers from occupied territories wrote about "crazy printer" and "Stakhanov pace". Such materials should not be confused with normal criticism of the authorities, their tone is frankly abusive and leads to the conclusion of Ukraine's continuous fail.

Supposedly ordered by OPFL materials spread the thesis about the absence of "socially significant" parliamentary bills among all approved and considered. In general, the attention to Medvedchuk has decreased a little, but the topics in which he was mentioned remain very diverse: the oppression of the opposition, negotiated "personally by him" discount on gas, the first place in the ranking of the most popular YouTube channels of politicians. And Medvedchuk's activities in preparation for the exchange of prisoners were "even monitored in Pakistan".

Disinformation from websites close to Donbas terrorists actively took up the OPFL thesis about censorship in Ukraine and harassment of free speech, citing Medvedchuk and Rabinovich.

Zelensky was credited with "euphoria from power lasting for the fourth month". The theses of usurping power, approaching authoritarianism or absolutism, and even potential coronation (!) are increasingly common. Problems with freedom of speech and dissolution of the Central Electoral Commission were used as supportive arguments.

The approved law on impeachment was presented as PR-step of the authorities by Ukrainian clickbait websites and in disinformation from occupied Donbas. It was argued that "the people wanted not an impeachment, but the removal of immunity from the president". As in previous editions of monitorings, disinformers on terroristic websites promoted two mutually exclusive theses: “Zelensky continues Poroshenko's repressions” and “Zelensky opposes Poroshenko” (who allegedly joined the "oligarchs' union" with Rinat Akhmetov)

The disinformers particularly addressed the plans of land reform in Ukraine and the creation of a land market. It was linked to the unrestricted influence of the US and the IMF, with "ministers who eat grants" ("grant-eaters" is used to describe liberals, who receive grant funding from international funds and organizations). We expected a campaign against the introduction of the land market a few weeks ago because it logically follows from Russia's goals to devaluate any positive changes in Ukraine.

There have been many fakes about shelling in the occupied territories. This topic was supplemented by considerations of the need for peace, the granting of special status to the Donbas and lies about sabotage by Ukraine of the peace process. Other foreign policy issues have bothered disinformers much less over the past week.

“The Crimean scenario will be repeated with Zaporizhzhia and other cities”: Russia made a loud statement about Zelensky’s position | replyua.net

Trump is ready for concessions, but he will not stop the war in the Donbas - Bezpalko | ukraina.ru (terrorist media)

In the DPR, reacted to the statement of Kyiv about the special status of Donbas | rusvesna.su (terrorist media)

Ukraine does not intend to "knock on closed doors" of NATO | rusnext.ru (terrorist media)

Ukrainians voted in 1991 for an alliance with Russia - Leonid Kravchuk | rusnext.ru (terrorist media)

Political analyst Markov urged not to behave with the West "as gullible natives" | antifashist.com (terrorist media)

Rada: a dictatorship of Servants

“The diagnosis of Iryna Gerashchenko”: Poroshenko’s comrade-in-arms was caught on indecent activity in Rada | politeka.net

The hybrid war in the Verkhovna Rada - the people's deputy | ua24ua.net

Razumkov demanded to take away foreign passports from the "Servant of the people" | antifashist.com (terrorist media)

Ze-button-pusher*. Why for non-personal voting “servants of the people” do not deprive the mandate | naspravdi.info (terrorist media) [*A button pusher (Ukrainian: Knopkodav) is a term in Ukrainian politics and society related to a member of the Verkhovna Rada of Ukraine who votes on a motion by using own identity card as well as ones belonging to other deputies.]

The Verkhovna Rada under Zelensky: a life of "mad printers" | nk.org.ua (terrorist media)

Alexander Kochetkov: Civil war is really going on in Ukraine.This is not a slip of the tongue, and I have not lost my mind. It is about information civil war | ua24ua.net

The exchange took place according to the same formula that Medvedchuk developed for the liberation of Savchenko, - Fomin | akcenty.com.ua

“You drove people to death”: Poroshenko recalled the incident in the Kerch Strait | replyua.net

Berlin is in hysteria over the exchange of prisoners between Russia and Ukraine | e-news.su (terrorist media)

Treason with the exchange: Sentsov and Kolchenko accused of being “Kremlin canned goods” | e-news.su (terrorist media)

Blogger: Hype around the name of Medvedchuk was needed by the authors of the film about Stus to "cut" the money | for-ua.life

Medvedchuk’s preparations for the exchange were monitored even in Pakistan | for-ua.life

Medvedchuk: Implementation of the Minsk agreements is not a capitulation to Donetsk and Lugansk | dneprcity.net

Oleshchuk: The release of the detainees is the result of Medvedchuk’s trip to Moscow | for-ua.life

Who is behind the shadow headquarters by Zelensky to launch the land market | ua24ua.net

Azarov pointed to the danger of a bill to lift a moratorium on land sales | ukraina.ru (terrorist media)

The project to clean the country from its inhabitants goes to the finish line | e-news.su (terrorist media)

"Wild market" and desolate villages. What will the privatization of the Chernozems lead to? | naspravdi.info (terrorist media)

The IMF came to us: will Ukraine cooperate with the Zelensky Foundation or not | ukraina.ru (terrorist media)

Igor Lesev opened his eyes to Ukrainians: now Zelensky will be removed only by revolt | ukrainianwall.com

Shufrich: The law on impeachment misleads the people of Ukraine | dneprcity.net

The first quarrel under the dome: How impeachment destroyed the constitutional majority in the Rada | dneprcity.net

Medvedchuk: The law on impeachment of the president is another PR-step of power | dneprcity.net

Medvedchuk: Having abolished parliamentary immunity, we need to take the second step - remove it from the president | for-ua.life

"Wolves are full": why Zelensky needs the law on the impeachment of the president | rusvesna.su (terrorist media)

Kucherenko: “Why was such a “race” necessary when adopting the law on impeachment?” | ukraina.ru (terrorist media)

Lyashko specified what is missing to launch the impeachment of the president | ukraina.ru (terrorist media)

The law on impeachment adopted by Zelensky became "another hoax", Zhuravko is sure | nation-news.ru (terrorist media)

Ishchenko told about the futility of the law on impeachment in Ukraine | ukraina.ru (terrorist media)

Shufrich declared that the adopted law on impeachment does not relieve the president of responsibility | ukraina.ru (terrorist media)

JFO: occupation and fakes about shelling

In the DPR, they are exploring the possibility of launching trains to Moscow and St. Petersburg | versii.com

"Fu****g circus": Even the separatists are furious with Pushilin’s trick on the front line | xn--j1aidcn.org

LNR accused Kyiv of destabilizing the situation in Donbas | versii.com

Summary from the PPD* DPR 09/14/2019. [*PPC - so-called public police department] Ukrofashists tortured, shot and burned a disabled person. Two servicemen of the Armed Forces of Ukraine were blown up by a landmine in the Krasnogorovka area. | e-news.su (terrorist media)

Killers for the money. Who is fighting with the militia of Donbas | e-news.su (terrorist media)

A resident of the LPR told about the horrors of the frontline Donbas after the change of power in Ukraine (VIDEO) | rusvesna.su (terrorist media)

How are calculated the Ukrainian shelling in the DPR? | e-news.su (terrorist media)

LPR called on the OSCE to monitor the territory of Donbas controlled by Kyiv | ukraina.ru (terrorist media)

We searched for topics in 2733 manipulative news in Russian from 18 propaganda sites and 61 Ukrainian online media, which was revealed more than 10% of manipulative news from all news about Ukraine, total - 81 sites. Manipulative news was determined by an improved classifier from the project "We’ve got bad news!".

Russia brandishes its arms, “riots” as in Kazakhstan are being prophesied in Ukraine. Disinformation monitor #111