Both disinformers from occupied territories and Ukrainian manipulative news continue to actively follow the work of the Verkhovna Rada and individual representatives of the new Cabinet of Ministers. In addition, the exchange of hostages, abolition of parliamentary immunity and so-called “pressure” on the NewsOne channel were highlighted in disinformation. The occupation media even managed to present the case of NewsOne as another oppression of the Russian language in Ukraine. As always, there has been a lot of disinformation about shelling from Ukrainian territories and the pro-Russian manipulation about Medvedchuk and his agreements with Putin. 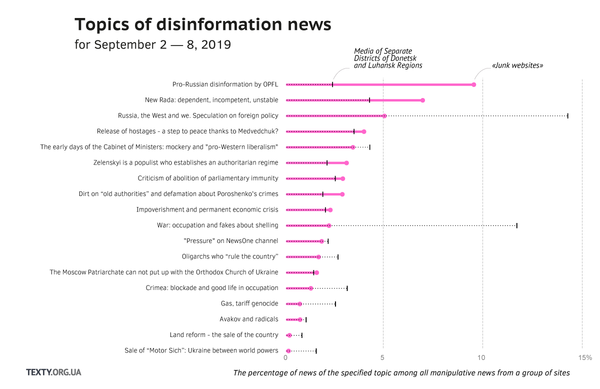 Topics of disinformation news for September 2—8, 2019

New Verkhovna Rada remains the focus of disinformers from the occupied territories and Ukrainian clickbait sites. There were predictions of the imminent crisis in the ruling party and Medvedchuk’s quotations regarding "constitutional spam." They continue to write about maintaining the influence of Poroshenko, which looks a little strange next to the conclusion that Zelenskyi's authoritarianism began after the abolition of parliamentary immunity. The disinformers from the occupied territories, and from some Ukrainian sites, called it a new way of fighting political opponents.

The new composition of the Cabinet of Ministers wasn't ignored as well. Most of all, they were pleased with the resignation of Ulyana Suprun, who allegedly led to the disaster of Ukrainian medicine, sneered at Prime Minister Goncharuk's scooter and several mistakes in a Facebook post by Education Minister Hanna Novosad. Alexei Goncharuk was accused of incompetence and his promise of an economic breakthrough in his premiership was claimed impossible. And the sites from occupied territories came to the conclusion that the entire Cabinet of Ministers is made up of “youngsters born with a silver spoon in their mouth”.

Ukrainian clickbait sites emphasized the blocking of the process of hostages exchange during Poroshenko's presidency and continued to attribute main credit in the release of hostages to Medvedchuk. The last thesis was also reproduced by terrorists’ media, which continued to write about an agreement between Medvedchuk and Putin. They called the return of detainees (“ours”) to Russia as Zelenskyi’s progress and supported the "correction of Poroshenko's errors". These joyous events did not prevent sites from the occupied territories to write that Zelenskyi was building an "authoritarian regime".

Putin's name has been mentioned many times in warnings of the consequences of Zelenskyi’s pressure on the opposition (namely OPFL) and personally on Medvedchuk. This thesis was duplicated by the media on both sides, changing only the verb that indicates what Putin did: warned, hinted or blamed. Websites from occupied territories again found the opportunity to point out the oppression of the Russian language in Ukraine. This time “pressure” on the NewsOne channel was a formal reason. The same theses about the death of independent journalism were promoted by sites from the occupiers and media working in favor of OPFL. It was accompanied by the mentions of yet another language conflict involving Rabinovich.

In news about international politics, disinformers continue to expose Ukraine as a bargaining chip in the geopolitical war between the global powers. As a confirmation, this time they used a public screening of a movie about Euromaidan events for Hong Kong protesters. Disinformation on both Ukrainian clickbait sites and on websites from occupied territories wrote about silencing of the allegedly catastrophic consequences of the protests: “A movie about Euromaidan was showed in Hong Kong, but no one mentioned what happened to Ukraine afterwards...”

In the Servant of the People party the crisis is inevitable | prportal.com.ua

Changed power, say? People of Kononenko, a friend of Poroshenko, bent the whole Kyiv region for themselves and no one decrees them | ukrainianwall.com

Korolevska: It is urgent to save our medicine after the disaster of the times of Suprun | golos.ua

“It's cheaper for sponsors” - Yakubin on why, in fact, reduce the number of deputies | ukraina.ru (terrorist’s media)

The first days of the Cabinet of Ministers: mockery and "pro-Western liberalism"

Suprun was hurt by the dismissal, the ex-minister could not stand it: “They drove me away from the trough” | politeka.net

The expert explained why the growth of the economy by 40% promised by Goncharuk is impossible | golos.ua

Under Goncharuk, nothing good in economics will come “completely” - Vasilets | ukraina.ru (terrorist’s media)

Yolopynia*: Education Minister Novosad on the Web was ridiculed through a bunch of errors in the text | antifashist.com (terrorist’s media) [*”Yolop” means “the fool” in Ukrainian, and “-ynia” is feminine ending. In this case, intentionally used in the sarcastic sense.]

Zelenskyi is a populist who building an authoritarian regime

A whole ministry has revolted against Zelensky, the scandal is roaring: “a flock of sabotage rats” | politeka.net

“It was beautiful”: Zelenskyi drove Poroshenko out of the Rada. Video | t.ks.ua

"Populism or convulsions." The head of Transcarpathian customs dismissed by Zelenskyi again took up his post | ukraina.ru (terrorist’s media)

"He does not know how different he is." Ermolaev told how Zelenskyi turned into a "lamp slave" | ukraina.ru (terrorist’s media)

“Why are you doing this ?!” - the angry Zelenskyi pounced on a simple Ukrainian, like Poroshenko | rusvesna.su (terrorist’s media)

Moscow will have to recognize the independence of LDPR, because Zelenskyi leaves no other choice | newsland.com (terrorist’s media)

Politician: ending the conflict with the Russian Federation will destroy the "project Ukraine" | ukraina.ru (terrorist’s media)

“Under him, this would not have happened for another 10 years”: Ukrainians were stunned by Poroshenko’s statement | replyua.net

Tiran: Today's exchange is a merit of Medvedchuk | dneprcity.net

Poroshenko is probably not very happy: the network is actively discussing the exchange of prisoners with Russia. Porohobots mourn | ukrainianwall.com

Exchange of prisoners: Putin and Medvedchuk agreed. What is known on Friday, September 6, at 13:30 | ukraina.ru (terrorist’s media)

I don’t care who flies from Moscow to Kyiv. The main thing is that OURS fly home. Julia Vityazeva | e-news.su (terrorist’s media)

Medvedchuk: exchange of held persons between Russia and Ukraine may take place in the coming days | nk.org.ua (terrorist’s media)

Next is authoritarianism, or Is there life after immunity? | dneprcity.net

Who will be imprisoned after January 1? | naspravdi.info (terrorist’s media)

Portnikov admitted that without parliamentary immunity there would have been no Maidan | ukraina.ru (terrorist’s media)

Prostakov about the abolition of immunity: "Zelenskyi decided to acquire a truncheon" | ukraina.ru (terrorist’s media)

“Is everyone really so afraid of disagreeing with the authorities?” - lawyer on the actions of the Rada | ukraina.ru (terrorist’s media)

Vasilets: “Cancellation of immunity is a cure for corruption” | ukraina.ru (terrorist’s media)

Pavlenko: Actions of the National Council on TV in relation to NewsOne - a direct violation of the Constitution and the law on information | dneprcity.net

At a meeting of the National Council on TV there was a skirmish over the Russian language | strana.ua

Rabinovich: Before our eyes, the authorities launched the murder of independent journalism | politeka.net

Zelenskyi will not support NewsOne, because he is interested in closing it - Svetlana Kryukova | golos.ua

The deputy from the Servant of the People condemned the pressure on the NewsOne channel from the National Council on television and radio broadcasting | politeka.net

“Nobody has won the war with journalists”: social networks continue to discuss the topic of freedom of speech | ukraina.ru (terrorist’s media)

Due to the Russian language in Ukraine, the procedure for banning the TV channel was launched | e-news.su (terrorist’s media)

"Another president, but nothing has changed." Social networks discuss the decision of the National Council on NewsOne | nk.org.ua (terrorist’s media)

We searched for topics in 2869 manipulative news in Russian from 18 propaganda sites and 61 Ukrainian online media, which was revealed more than 10% of manipulative news from all news about Ukraine, total - 81 sites. Manipulative news was determined by an improved classifier from the project "We’ve got bad news!".