Monitoring of topics of Russian disinformation. Issue #9. "Too liberal" Cabinet of Ministers and the threat of putsch

The first working week of the Verkhovna Rada became a key topic for Ukrainian manipulative news sites as well as for disinformers from the occupied territories. Media from occupied territory have paid much attention to geopolitics and war. Traditionally, about 10% of the disinformation messages from occupied territories’ media were fakes about shelling from the Ukrainian army. Preparations for the release of the hostages were marked by materials from OPFL (Opposition Platform — For life) representatives and Russian propagandists celebrating the release of Vyshinsky. 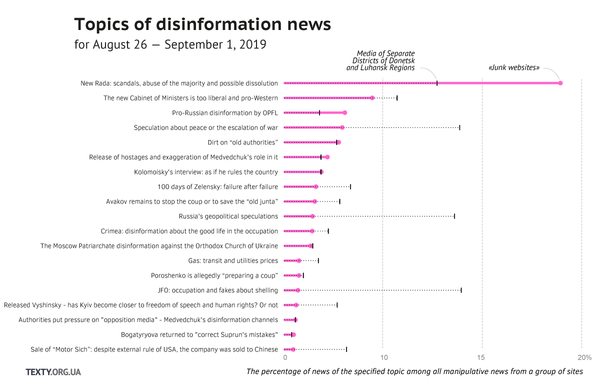 Apart from reports of curiosities in Rada and photographed messengers of MPs, in disinformation and manipulative news wrote about the distribution of committees, the rights of the opposition, and the prospect of the dissolution of the Verkhovna Rada that had just begun its work. The latter was triggered by an interview with Kolomoisky, who pointed to the “disintegration” of the one-party majority. Media from the occupied territories have taken up this comment and, along with the idea of a strong hierarchy within the Servant of the People party, have advanced the thesis of the Rada's dependence on the president. Media close to the OPFL complained that few committees have been allocated for the opposition, and Servant of the People group will block the work of the Committee on Freedom of Speech.

The new Cabinet of Ministers has caused dissatisfaction within pro-Russian and occupational media. They emphasized the ties of many newly appointed ministers with the previous government and Western organizations. The preservation of the ministerial post by Avakov was interpreted as the dependence of Zelensky on Kolomoisky.

In preparation for the release of Ukrainian hostages, disinformation amplified not only the conditions of exchange from the Russian side, such as “start adhering to Minsk agreements”, but also mentioned Medvedchuk too much. The material on OPFL heads' visit to the political prisoners in Moscow with “salo and sweets” was published with almost identical headlines on a number of Ukrainian and terrorists’ websites. In the disinformation publications, Vyshinsky (former editor-in-chief of RIA Novosti in Ukraine) was given a special role. He was considered separately from the rest of the exchange lists. Following his release from detention, along with Russian propagandists, for example, Simonyan (RT), who was concerned for Vyshinsky’s “security in Ukraine”, the OPFL also issued a statement on “the act of restoring legality and human rights”.

Geopolitical disinformation related to G7/8, as mentioned in previous issues, to new sanctions by the US, and to Trump’s intention to freeze military aid to Ukraine. The narrative of “external governance” was observed not only in purely geopolitical materials, but also in relation to the new Cabinet of Ministers. Ukrainian manipulative news almost ignored the sale of Motor Sich company to the Chinese, but the media from occupied territory used this news as an indicator of deteriorating relations with the United States and a permanent "economic crisis" and "de-industrialization" in Ukraine. The key message of disinformation on the international policy was that everything is good for Russia, and Ukraine is, as always, annoying to the world.

Although in previous issues we have noticed disinformation that Poroshenko is preparing a putsch (for example, during the Defenders March for Independence Day), Russian disinformation received a message from an MP Bogutska about a "putsch" rather sarcastically. The share of material in this topic was roughly equal on both Ukrainian clickbait-sites and in occupation media.

New Rada: scandals, abuse of the majority and possible dissolution

Pogrebinsky: Following the law on regulations, the new government does not want to share committees with the opposition | dneprcity.net

The new government abandoned most of its promises in a hundred days | rupor.info

Pogrebinsky: Following the law on regulations, the new government does not want to share committees with the opposition | 112.ua

Romanenko: “Zelensky develops a taste for it and hints that he could disperse the Rada” | ukraina.ru (terrorist’s media)

Poroshenko in the Parliament arranged a skirmish with Shufrich | e-news.su (terrorist’s media)

Member of Parliament made colleagues laugh when trying to speak in Ukrainian | e-news.su (terrorist’s media)

“A very bad sign: as if someone invisible beats Poroshenko on the hands” (VIDEO) | rusvesna.su (terrorist’s media)

Well, that's all: The newly minted Prime Minister of Ukraine prepares a plan for the collapse of the country | ukrainianwall.com

The expert gave an assessment to the new Cabinet: the government of pro-Western liberals | golos.ua

The new government of Ukraine. They know where paradise is | nk.org.ua (terrorist’s media)

Oleg Bondarenko about the new Prime Minister of Ukraine: “35 years is not an age for a statesman” | ukraina.ru (terrorist’s media)

Battle for the Prime Minister or the First Clinch of Zelensky and Kolomoisky | antifashist.com (terrorist’s media)

Speculation about peace or the escalation of war

Big changes are coming: Donbas is in anticipation because of Pushilin's statement | xn--j1aidcn.org

The expert assessed the prospects of implementation of the Kolomoisky initiative | nk.org.ua (terrorist’s media)

Will the new head of the Ministry of Foreign Affairs take control of the border with Donbas in six months? | nahnews.org (terrorist’s media)

For Zelensky, the war in the Donbas is a trump card that burns hands - Mukhin | ukraina.ru (terrorist’s media)

Kolomoisky: First we will return the Donbass, then - Crimea | rusvesna.su (terrorist’s media)

The Zionist dominance of Ukraine began, and, in fact, the dictates of “Israel” in the “independent” … | rnbee.com.ua

"Anti-Russian sanctions will have negative consequences only for the United States," - the Russian deputy | replyua.net

The expert explained why the United States will reduce Ukraine into five areas | e-news.su (terrorist’s media)

Kedmi explained why try to return Russia to the G8 | nation-news.ru (terrorist’s media)

Sergey Markov: If Lukashenko ran for Ukraine, he would have defeated Zelensky | antifashist.com (terrorist’s media)

Bargained and negotiated: Trump decided to freeze military aid to Ukraine, the US armed forces contingent will be withdrawn from Yavoriv training ground | antifashist.com (terrorist’s media)

100 days of Zelensky: failure after failure

Having endured the presidency of Zelensky, the next time the people will vote for the party of Boyko - Medvedchuk, - Limonov | from-ua.com

The result of one hundred days of the presidency: How Zelensky programmed his fall | golos.ua

Oleg Soskin. Zelensky's team on the verge of a terrible failure | osp-ua.info

Zelensky could not pronounce the word "Russia" | nk.org.ua (terrorist’s media)

Parliamentarians in Russia evaluated the first hundred days of the presidency of Zelensky | nk.org.ua (terrorist’s media)

This show is worth an Oscar. Social networks about one hundred days of Zelensky | ukraina.ru (terrorist’s media)

A man with a capital letter: what Zelensky is proud of as president of Ukraine e-news.su (terrorist’s media)

Bortnik: Zelensky’s “honey period” is over, but Ukrainians still believe in him ” | ukraina.ru (terrorist’s media)

Gasparyan on the hundred days of Zelensky: the new president was not chosen to rename the presidential administration in the OPU (*Office of the President of Ukraine) | ukraina.ru (terrorist’s media)

One Hundred Days of Solitude: President Zelensky without Cabinet of Ministers and Parliament | ukraina.ru (terrorist’s media)

Release of hostages and exaggeration of Medvedchuk's role in it

Putin's security officials object to the inclusion of individual citizens of Ukraine on the exchange between Russia and Ukraine | ukrainianwall.com

Rabinovich and Medvedchuk in Moscow thanked Zelensky for moving the exchange issue off the ground | dneprcity.net

Zelensky in anger? Medvedchuk wedged into an exchange of prisoners | kordon.org.ua

Rabinovich and Medvedchuk brought lard to Karpyuk in Lefortovo and hinted at an early release. Video | strana.ua

The reason for the meeting in the "Norman format" will be only when Medvedchuk organizes an exchange of prisoners, - Skubchenko | ukrainianwall.com

Exchange of prisoners: for whom Ukraine and Russia have exchanged | antifashist.com (terrorist’s media)

Medvedchuk said that the option of exchanging prisoners between Russia and Ukraine has not yet been developed | nation-news.ru (terrorist’s media)

"I was sure that the Ukrainian side will try to fool ours. I was not mistaken." Some facts about the exchange of prisoners | antifashist.com (terrorist’s media)

Kyiv admitted that Ukraine is taking hostages for an exchange with Russia and the Donbas | nahnews.org (terrorist’s media)

Released Vyshinsky - has Kyiv become closer to freedom of speech and human rights? Or not

What is known about Vyshinsky: anti-Ukrainian articles, Russian awards and an appeal to Putin | newsmir.info

The release from custody of Kirill Vyshinsky is an act of restoring the rule of law and human rights, - the statement of the "Opposition Platform - For Life" | 112.ua

Maria Zakharova immediately commented on the release of the chief editor of RIA Novosti Ukraine | newsmir.info

OPPOSITION PLATFORM - FOR LIFE: We will ensure that those guilty of violating the rights of journalists are punished | golos.ua

Margarita Simonyan: now our task is not to do anything that could harm Kirill (*Vyshinsky ) | newsland.com (terrorist’s media)

Poroshenko is allegedly preparing a putsch

Poroshenko is preparing a putsch, Zelensky made an emergency statement: the date is known | politeka.net

"The putsch of Poroshenko": the expert called the condition for the beginning of the unrest in Ukraine | kordon.org.ua

Political scientist commented on the correspondence of the Ukrainian people's deputy about the "Petya's putsch" | alternatio.org (terrorist’s media)

The deputy of the party "Servant of the People" revealed why Zelensky leaves Avakov | nation-news.ru (terrorist’s media)

Sale of Motor Sich: despite external rule by the US, the company was sold to Chinese

"All the dirt poured into Kyiv": In China, John Bolton was pounced | replyua.net

"Obtained" in three digits. De-industrialization sweeping the country. There are NO "Great Agrarian States" in the world! | ua24ua.net

Smeshko pointed to a real threat to the defense of Ukraine | replyua.net

500 million dollars to the Chinese from Ze. How the USA seeks urgent cancellation of the Motor Sich transaction and what will happen to the enterprise now | strana.ua

Russia ahead of the US and China in the acquisition of Motor Sich | nation-news.ru (terrorist’s media)

We searched for topics in 2656 manipulative news in Russian from 18 propaganda sites and 61 Ukrainian online media, which was revealed more than 10% of manipulative news from all news about Ukraine, total - 81 sites. Manipulative news was determined by an improved classifier from the project "We’ve got bad news!".