The main topics of disinformation have not changed much. OPFL (Opposition Platform — For Life) comments on any occasion, impoverishment, speculations on foreign policy, Poroshenko once again seemed to run away from the country and prepare a rematch, in occupied territories disinformation about Ukrainian “punishers” killing civilians is repeated again and again. The narrative of hopeless Ukraine is timed to Independence Day. And there are new notes: justification of the MP from the "Servant of the People" Maxim Buzhansky, who has pro-Russian views and called the female journalist of the Novoie Vremya journal a "dumb sheep". There have also been attempts to downplay the importance of Israeli Prime Minister Benjamin Netanyahu's visit to Kyiv. 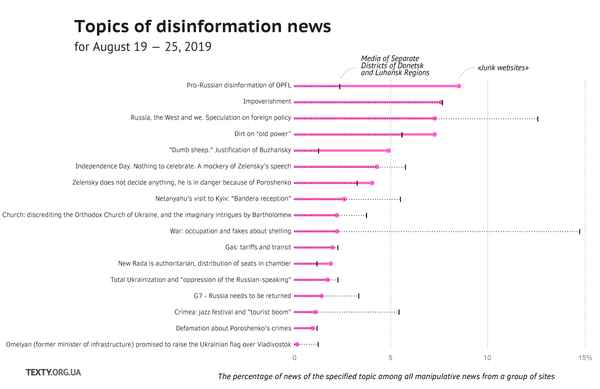 Ukraine's Independence Day coverage in manipulative news from Ukraine was overwhelmingly positive, that's why some materials were automatically classified as emotional manipulation. Instead, the publications in the occupied territories mocked Ukrainian Independence and mentioned Nazism. The basic idea is that our independence is illusory, and it was given to Ukraine by mistake.

Disinformation about the president was related to Independence Day celebrations, the visit of the Prime Minister of Israel to Kyiv, and speculated about the formation of the new government. In manipulative news from Ukrainian sites exaggerated confrontation between the new and the old authorities, even to the point that Zelensky is in danger. Example, “Former President of Ukraine Petro Poroshenko wants to undermine the rule of Vladimir Zelensky. He wants to organize early elections in the country”. Russian propaganda outlets, on the contrary, wrote about the similarity between Poroshenko and Zelensky, as the did previously.

Netanyahu's visit was criticized on both Ukrainian and terrorists’ websites. The latter were outraged by the greetings "Glory to Ukraine" during official events and by the comparison of the Holodomor (Famine-Genocide of 1932-33) with the Holocaust. Another striking foreign policy issue was the prospect of Russia's return to the Great Seven. The story has been presented as if everyone wants Russia back, but Russia doesn't really need it. Russian disinformation, as usually, sought to show Russia as a respectable and attractive world power.

In anticipation of the beginning of the Verkhovna Rada's work, Russian misinformation did not get past the topic of the distribution of deputies’ seats, in which the majority by the Servant of the People are placed in front, and the rest of parties are on the back seats. Previously parties sat by sectors. A new scheme of seats was interpreted as the beginning of a dictatorship. It is important that pro-Russian disinformation interpreted a high level of support of the Servant of the People in the elections as a risk of authoritarianism. The lion's share of disinformative comments about the new Rada had signs of supposedly paid materials in favor of the OPFL. Infospace of clickbait sites was perturbed by personnel issues of future Cabinet of Ministers at that time. Among the materials with unjustifiably harsh criticism of the previous authorities, there were expressions and fears about the possibility of leaving some officials in the renewed state bodies. This was presented as a weakness of the authorities.

Disinformation about Joint Forces Operation, attacks on the Orthodox Church of Ukraine and the Ukrainian language have traditionally taken their place in the flow of disinformation. Another resonant topic was the insult of a female journalist from a leading Ukrainian news outlet by an MP from the Servant of the People Buzhansky. Pro-Russian websites supported and justified Buzhansky.

Russia, the West and we. Speculation on foreign policy

Putin has opposition from security officials, and it can interfere with an exchange of prisoners with Ukraine, - Venediktov | 112.ua

Surkov announced the struggle of two approaches surrounded by Putin to the Donbas and Ukraine | strana.ua

Secret T project: why defense adviser to US president is going to Kyiv | nk.org.ua (terrorist’s media)

Zelensky failed the role of the tail wagging the dog | naspravdi.info (terrorist’s media)

Publicist on the crisis in Ukraine: “Default will be much worse than in Russia” | replyua.net

The results of twenty-eight years: independence without people | golos.ua

Ukraine cannot be called independent if the average pension in the country today is $ 60 - Reva | replyua.net

Why does ghoul Kobolev get 30 times more than President Trump?! | politica.com.ua

Permanent Representative of Ukraine to the Council of Europe: “We are losing the main features of the state - the population and the territory” | nk.org.ua (terrorist’s media)

Ukrainian model: GDP is growing, but the economy is falling | antifashist.com (terrorist’s media)

Threats and intimidation: how Sytnik tries to evade responsibility in the case of VIP-rest, - media | from-ua.com

Last days in power: what do top officials of Poroshenko live with | newsmir.info

Grymchak began to “tweet” behind bars or, better to say, in a cage. Hover begins… | ua24ua.net

Who will put Poroshenko in prison: The expert warned where the "tentacles" of the ex-president remained | xn--j1aidcn.org

Yuri Romanenko: “Zelensky will do the right thing if he gives the PGOU (*Prosecutor general's office in Ukraine) the opportunity to punish” | kordon.org.ua

Bondarenko called for the abolition of the law on amnesty of Maidan's activists and punish participants of the state coup | comitet.su (terrorist’s media)

Suprun admitted that every Ukrainian was mentally injured due to the war on Donbas | antifashist.com (terrorist’s media)

Yuri Grymchak: On the hands of Khodorkovsky and Lutsenko blood of the "heavenly hundred" | e-news.su (terrorist’s media)

Pavlenko on attacks on Channel 112: This is the first battle between independent media and the new government | 112.ua

Medvedchuk commented on the steady decline in the number of supporters of Ukraine’s entry into NATO | newsmir.info

For Zelensky, a deal with the opposition of Medvedchuk is a chance to bring peace and prosperity to Ukraine - Polish website Dzisiaj | akcenty.com.ua

Victor Medvedchuk: the question of lifting the moratorium on the sale of land can only be resolved in a referendum | politeka.net

In Ukrainian society, support for NATO fell and the number of opponents increased | e-news.su (terrorist’s media)

Power against the media: propagandists and populists from Kvartal 95 are pushing journalists in Ukraine | ukraina.ru (terrorist’s media)

Zelensky does not decide anything, he is in danger because of Poroshenko

“Tossing bags and bullsh*t, there is a huge abyss”: the journalist has a brutally go at Zelensky | kordon.org.ua

Korchinsky criticized Zelensky speechwriters - the president’s speech should not cause laughter | replyua.net

Zelensky shocked everyone with a statement, no one is hiding from the new law: “They can imprison” | politeka.net

In Ukraine, the elite is changing. But will there be new pro-Russian forces in the country? | antifashist.com (terrorist’s media)

“28 years of hope and disappointment”: a foreign look at the Independence of Ukraine | golos.ua

What happens if Zelensky organizes a pug parade on Khreshchatyk? | nk.org.ua (terrorist’s media)

People in white and people in camouflage. How Ze and the nationalists were held parades | naspravdi.info (terrorist’s media)

In the LPR announced the downed drone of Ukrainian security officials | versii.com

APU for the day shot the 141 ammunition on DPR, six houses were damaged and destroyed | voenkor.info (terrorist’s media)

We searched for topics in 2616 manipulative news in Russian from 18 propaganda sites and 61 Ukrainian online media, which was revealed more than 10% of manipulative news from all news about Ukraine, total - 81 sites. Manipulative news was determined by an improved classifier from the project "We’ve got bad news!".