Monitoring of topics of Russian disinformation. Issue #6. Medvedchuk and Shariy

Two weeks before the election, the number of anti-Ukrainian materials from Opposition Platform “For Life” (OPFL) continued to grow. Media from the occupied territories, in addition to the standard theses on shelling, peace and impoverishment, accused the Ukrainian authorities of suppressing freedom of speech through the cancellation of teleconference "Need to Talk" and the trial of Vyshynsky (former editor of RIA Novosti in Ukraine). 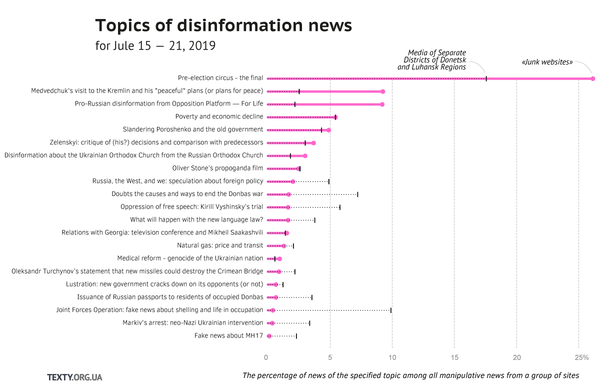 The main event of July 15—21 was early parliamentary elections. Junk websites published tons of black PR against opponents, first-past-the-post voting candidates accused each other of bribing voters. While websites from the occupied territories speculated about the election process and the fate of the future Verkhovna Rada. The electoral process in disinformation from the occupied territories was presented as bribery by majority voters, cementing of the Zelensky regime, making fun of most political forces and the campaign as a whole.

Attention to Zelensky decreased in election week, comparing to previous weeks. A large part of disinformation news on July 8-14 was dedicated his visit to Boryspil and his style of behavior there. Most of the material was rather mocking than informative. For example, a website from occupied territories wrote about Zelenskiy visit to Odesa with headline “Zelensky copies Putin. Ukrainian guarantor appeared with bare torso in Odesa”. Anti-Ukrainian materials continued to compare Zelenskyi with the his predecessor. We first noticed this line of disinformation on the sites from occupied territories, but now it is replicated, for example, in supposedly paid-for materials in favor of OPFL: "Medvedchuk stated that Zelensky, like Poroshenko, splits the country with his stone age russophobia." 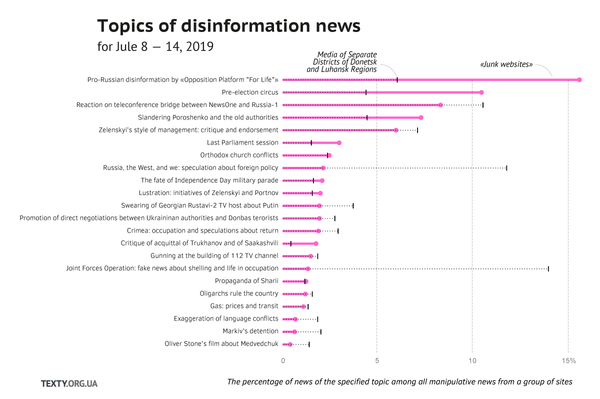 Anti-Ukrainian disinformation was replicated in supposedly paid-for materials in favor of OPFL and Medvedchuk. The number of such materials increased before the election, compared to the previous weeks. In addition, the visit of majour OPFL representatives to Moscow was widely covered. They mentioned gas, peace plans, the second "president of war" and hostage exchanges. There has been a noticeable gradual transition from electoral manipulation to pushing the idea of ​​peace talks and compromise with terrorists. Medvedchuk is increasingly being presented as a skilled negotiator and hostage exchanger.

Much of the news on July 8—14 focused on plans to host a teleconference between NewsOne (Medvedchuk) and Russia1. Support for the propaganda campaign was expressed in the media controlled by Medvedchuk, or in supposedly paid materials on the Ukrainian junk websites. A great share of manipulative news from Ukraine were emotionally biased, but protested against the teleconference. The publications from the occupied territories were written in support of the teleconference. In the second, election week, the topic of the teleconference transformed into an outcry about the suppression of free speech in Ukraine. The Vyshynsky trial and the firing of a grenade launcher into the building of the 112 TVG channel were the information drives.

Disinformers have continued to update topics that deepen and provoke divisions in Ukrainian society: language and the church. When Filaret became less acute, they returned to questioning legitimacy of the Orthodox Church of Ukraine. Attempts to actualize the language issue concerned mainly the fate of the law on language. Demonization of Poroshenko continued as well.

Expert: Muraev is a puppet of power used to confuse opposition voters | dneprcity.net

Igor Vasilkovsky: "To my competitors: dirty tactics will not stop me!" | odessamedia.net

The "servant" learns to get what’s his | odnarodyna.org (terrorist publication)

Fahrion woke up: "attacked" Zelenskyy and called him a product of the Russian world | ukrainianwall.com

Building a new Reich will not suceed | e-news.su (terrorist edition)

“#Grid.” Remake. How candidate’s from Poroshenko’s party are trying to buy votes in their districts | naspravdi.info (terrorist publication)

Party of balloons: where does the “live revolution” lead in Ukraine | naspravdi.info (terrorist publication)

Medvedchuk's visit to the Kremlin and his "peaceful" plans

Medvedchuk: Lukashenko plays an important role in the peace talks on the Donbass | ukrainianwall.com

Medvedchuk presents a peace plan to the European Parliament in Strasbourg for resolving the crisis in the Donbas | politeka.net

Medvedchuk was called upon by the European Parliament to assess the repressions being conducted by the Ukrainian authorities | znaj.ua

“They won't get away with it” - Medvedchuk accused Opposition Block of violations against Opposition Platform | ukraina.ru (terrorist publication)

Oleg Tsaryov: The best coalition would have been with Medvedchuk, but the Ukrainian right would not allow it | antifashist.com (terrorist publication)

Shufrich: Zelenskyy in matters of freedom of speech also turns into Poroshenko | dneprcity.net

Rabinovich: the 6th number in the bulletin - the biblical symbol of creation - was given to OPPOSITION PLATFORM - FOR LIFE | crisis.in.ua (terrorist publication)

Leaders of the “Opposition Platform - For Life” held a meeting with Russian Prime Minister Medvedev and the leadership of United Russia | 112.ua

In Slavyansk they expressed distrust in the mayor, Lyakh: he betrayed the community and gave up the city to Poroshenko - Oleg Nedav | rupor.info

The head of the electoral commission from "Opposition Block" stole 200 ballots at a site in the Donetsk region - OPPOSITION PLATFORM - FOR LIFE | golos.ua

Reaction to the television conference with Kremlin Media

Shufrich turned hard on Parubiy, Poroshenko, Lutsenko and Zelenskyy because of the pressure on NEWSONE | newsmir.info

Medvedchuk supported the idea of a teleconference between Ukrainian and Russian television | 112.ua

Rabinovich: Zelenskyy turned too quickly from a "servant of the people" into a gentleman

In Kyiv there is a rally in defense of the TV channel NewsOne - LIVE BROADCAST | rusvesna.su (terrorist publication)

Instead of a productive conversation, a pre-election hype turned out - Dzhangirov | ukraina.ru (terrorist publication)

For some Ukrainian politicians, peace in Ukraine is not advantageous - Pikhovshek endorsed the idea of conducting a teleconference with Russia | crisis.in.ua (terrorist publication)

Yuriy Boyko: After the elections, we will revise the pension reform | t.ks.ua

“We are getting into debt”: the expert explained how Ukraine is being driven debt bondage | khersonline.net

Zagid Krasnov told what is needed for the development of medicine in Ukraine | dneprcity.net

Portnikov made fun of Zelenskyy and the Ukrainians: “There will be no Olympiad!” | antifashist.com (terrorist publication)

Government in ruins raises the price of education and make it inaccessible | anna-news.info (terrorist publication)

Slandering Poroshenko and the old government

“He hates those around him”: Poroshenko was rendered a deeply sick verdict on social media | from-ua.com

In Ukraine they told when mass arrests of Poroshenko’s entourage will begin | e-news.pro (terrorist publication)

"Scammer-separatist": Poroshenko became a fan of Putin and is ready to start a new war | akcenty.com.ua

Portnov: Today Ukrainians are getting rid of Omelyan and Suprun | ukraina.ru (terrorist publication)

Rabinovich and Avakov discussed the shelling of the TV channel "112 Ukraine" | 112.ua

Medvedchuk: I think Vyshinsky will be able to return to freedom and prove his innocence | dneprcity.net

“Opposition Platform - For Life” demands the release of Kiril Vyshinsky and the end of the freedom of speech violations | znaj.ua

Vyshinsky again remained behind bars: Ukraine does not hide that he is a political bargaining chip for trading with Russia | antifashist.com (terrorist publication)

Zelenskyy: critique of decisions and comparison with predecessors

Zelenskyy “tore apart” a boorish official on camera: “He also needs to be hit in the face” | newsmir.info

Zelenskyy in his underpants caused a stormy reaction from Ukrainians: “Screw them,” this video caused a stir | politeka.net

Zelenskyy's U-turn over the Dnieper. How the "Servant of the People" is becoming a "party of war" | 112.ua

The President is manipulated by his entourage, he was framed in Boryspil - Bortnik | ukraina.ru (terrorist publication)

"Behead and impale them," - Zelensky's adviser on the fate of Donbass and Russia | rusvesna.su (terrorist publication)

Promoting direct dialogue with Russia and the militants

Medvedchuk: On the issue of peace, neither the pressure of the authorities nor the threat of the radicals will stop us | onpress.info

Medvedchuk’s party demanded that Zelenskyy fulfill the will of the Ukrainians and enter into direct dialogue with Putin | golos.ua

They are trying to get out of the Normandy format and Minsk agreements”: in the DPR they commented on Zelenskyys’s initiative to involve the US and the UK in negotiations | antifashist.com (terrorist publication)

In the LPR, people responded to Zelenskyy’s statement about lifting the blockade from the Donbass | rusvesna.su (terrorist publication)

A. Zolotarev: “Poroshenko is behind the protests against Klyuev on Maidan” | golos.ua

Poroshenko is not an obstacle: "The Party of Sharia" is confidently moving towards the renewed parliament | donbass.ua

Rock-bottom: Drunk Poroshenko in Kamyanets-Podolsk swearing from the stage at people with balloons | antifashist.com (terrorist publication)

Mosiychuk demands that the Security Service of Ukraine open a criminal case against Russian lawyer Feigin for calls to beat and humiliate the supporters of Sharia | comitet.su (terrorist publication)

We searched for topics in 3731 manipulative news in Russian from 18 propaganda sites and 61 Ukrainian online media, which was revealed more than 10% of manipulative news from all news about Ukraine, total - 81 sites. Manipulative news was determined by an improved classifier from the project "We’ve got bad news!".