On June 24 - 30 Russian disinformators celebrated a return to the PACE. Traditionally, the publications from SDDLR spread lies about the shelling of civilians by the Armed Forces and presented news about Ukraine in the context of the failed state. The pro-Russian disinformation on Ukrainian sites was most widely distributed through materials with signs of an order from the OPFL (Opposition Platform — For life). 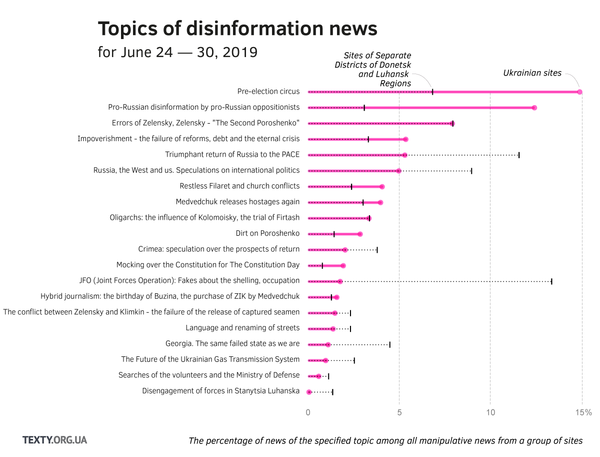 The parties' struggle before the snap parliamentary elections continues to dominate among in topics on Ukrainian information sites. While Ukrainian online-media publish disinformation about almost all candidates, pseudo-news sites from the occupied territories choose the most ridiculous and emotional pieces to discredit the electoral process. "The new staff of the Rada: uneducated youth and PTU-students will write laws for a 35-million country" - writes one of the media from SDDLR. [note: PTU - professional technical school, a type of vocational school. In this case, is used in a disgraceful tone to underline the lack of competence. Also, the population of Ukraine is 42 million (ukrstat.gov.ua)]

Comparing to previous monitoring, the number of allegedly paid materials in favor of the pro-Russian opposition, in particular Medvedchuk, is increasing on Ukrainian sites. These materials contain not just pre-election manipulations, but also promote the themes in favor of Russia. For example, the only true vision of peace as capitulation, inaction of the authorities in achieving peace, anti-democratic persecution of the opposition, Russian gas, total impoverishment. Boyko and Medvedchuk are presented as the only messiahs for Ukrainian people. In this case, supposedly paid news become not only a manipulation to influence the voter and violation of the law of Ukraine "On Advertising", but are also used as an instrument of Russian disinformation.

During the monitoring period, authors of disinformation materials raised the issue of the release of hostages. The first information reason was the dispute between Zelensky and Klimkin regarding the note issued by the Ministry of Foreign Affairs of Ukraine on the release of seamen who were taken hostage while crossing the Kerch Strait. Attacks such as "Klimkin-Poroshenko dismissed return of the mariners. To harm Zelensky" were directed to the Minister of Foreign Affairs. At the same time, Russia's provocative demand was not taken into account: for the release of hostages it was necessary to actually recognize Russia's jurisdiction in Crimea.

Medvedchuk's return to talks on the release of hostages has become the second informational occasion. Websites from occupied territories and disinformation in Ukrainian online-media represented this politician as an effective negotiator on issues of peace and release of prisoners, unlike the Ukrainian authorities.

In the investigated period, the following resonance topics were found in disinformation news: the return of the Russian delegation to the PACE, the purchase of a Zik TV-channel by Medvedchuk, and searches at the Ministry of Defense. The unconditional return of the Russian delegation to the PACE has become the main theme for advancing the narrative on how Europe is tired of Ukraine. Such disinformation spreads mainly through the websites from the occupied territories. This corresponds to the nature of disinformation on foreign policy issues that we have seen in previous weeks.

As in previous monitorings, sites from the occupied territories criticized the President and the Ukrainian authorities. Zelensky there is often compared with Poroshenko. Disinformation about the current government and the president from Ukrainian sites was both critical and approving or neutral towards the authorities. The conflict between Filaret and the Orthodox Church of Ukraine, topic of impoverishment and the eternal economic crisis, speculating on the topic of Crimea's return were the reason for disinformation in this monitoring, as well as in previous weeks. The themes of Ukrainization and nationalists have received relatively less attention this time.

Yanukovych’s Companions, Movement of New Forces of Saakashvili, Parasyuk, the Communist Party of Ukraine and the Union of Leftists and CEC does not allow to vote. | e-news.pro (terrorist’s media) [note: CEC - Central Election Commission]

Yuzik gathered in the Rada with all the "collective farm": the network is boiling about such a "family contract" - The Chronicles of the Permanent Crisis in Ukraine | crisis.in.ua (terrorist’s media)

Ukrainians want to see Medvedchuk as the new Chairman of the Rada | from-ua.com

"Spalahuyka number 2". Vakarchuk promised to strangle himself, if 10 million migrant workers do not return to Ukraine | e-news.su (terrorist’s media) [note: Spalahuyka the same as a lighter in English. But it often used in a disgraceful tone cause of fun form, because this word consonants with the abusive word that denotes a penis]

20 bucks is always 20 bucks: Zibrov helps Lugansk separatists to get into the Ukrainian parliament - Chronicles of the Permanent Crisis in Ukraine | crisis.in.ua (terrorist’s media)

Portnov saw a positive in the growth of rating of "greedy and stupid" Vakarchuk | ukraina.ru (terrorist’s media)

Anatoly Gritsenko shot a masterpiece of ragulism | beztabu.net [note: Here means “failure”. “Ragulism” derived from “ragul” - a "rural resident" in the Ukrainian and Russian youth and criminal slang. One of the disreputable nicknames of Galician Ukrainians, which some Russians used in Lviv since the 1960s. In the broadest sense, a non-cultural person.]

Party of Saakashvili was refused to register: the politician accused Poroshenko | inform-ua.info

If Zelensky will continue his current personnel policy in the formation of the party, he will repeat the fate of Yushchenko - Rudenko | replyua.net

"Like a panda at the zoo!": Zhadan harshly criticized Zelensky | xn--j1aidcn.org

Epic "achievements" of Zelensky for the first month: looks like a joke, but it's true | rusvesna.su (terrorist’s media)

Zelensky again was poured with anti-Russian bile and embarked on the path of crimes against Donbass | e-news.pro (terrorist’s media)

Results of Zelensky’s activities for the month: a wave of raiding has begun in the country - expert | golos.ua

Hybrid war against Russia: the hopelessness of the darkness is being intensified | rusvesna.su (terrorist’s media)

Triumphant return of Russia to the PACE

"The young green president is not rowing": "new face" got a slap in the face because of the return of the Russian Federation to PACE | from-ua.com

The defeat of Ukraine in the PACE: what lesson received dreamers | politeka.net

State Duma deputy: Ukrainian politicians everywhere are shocking others with their behavior, this is just a matter of education | alternatio.org (terrorist’s media)

"Forgotten their place". The expert assessed the appeal of the Ukranian delegation to dismiss the head of the PACE | alternatio.org (terrorist’s media)

Zelensky is not worth blowing cheeks, it is better to listen to the opinion of Europe (terrorist’s media)

Donbass under fire: the command of the Armed Forces of Ukraine gave the go-ahead for shelling | odnarodyna.org (terrorist’s media)

Killers of the Armed Forces of Ukraine turn the life of residents of Donetsk into hell (video) | rusvesna.su (terrorist’s media)

#ZelenskyAssignDonbassChoice: residents of the LPR and the DPR demand peace from the President of Ukraine | ukraina.ru (terrorist’s media)

Putin cited as an example for the Ukrainian authorities a direct dialogue of Medvedchuk, who achieved the liberation of 4 Ukrainians | ukrainianwall.com

What kind of people are you? Klimkin-Poroshenko dismissed return of the mariners. To harm Zelensky | bbc-ccnn

"I have not seen this", - Zelensky dishonores, Klimkin throws up his hands (video) | rusvesna.su (terrorist’s media)

"Shame Ukrainian diplomacy! Starting with the appearance": in Kyiv commented on the activities of Pavel Klimkin | antifashist.com (terrorist’s media)

We searched for topics in 3310 manipulative news in Russian from 18 propaganda sites and 61 Ukrainian online media, which was revealed more than 10% of manipulative news from all news about Ukraine, total - 81 sites. Manipulative news was determined by an improved classifier from the project "We’ve got bad news!".