Monitoring of Topics Raised by Russian Disinformation. Issue #4. Poroshenko and Election Circus Are to Blame

During 17-23 June media spread disinformation about geopolitical plot between US and Russian government, criticized Zelenski and Poroshenko, wrote about the parliamentary elections and provided misleading information about significant topics of the week: MH17 investigation report, the so-called “sobor” (meeting of bishops) called by Filaret, Portnov attempt to get back his chair in Taras Shevchenko University. “Junk websites” also picked up some topics of Russian disinformation. 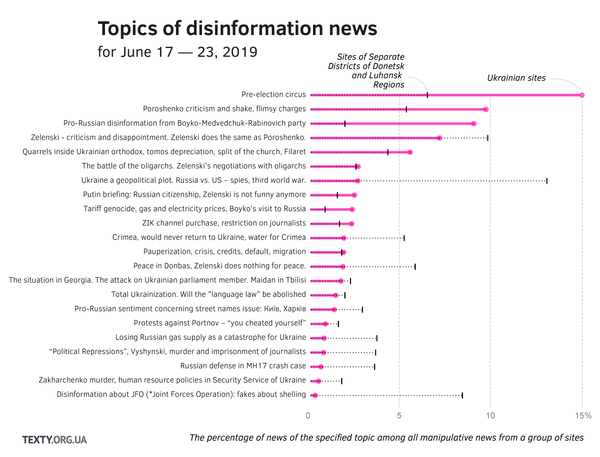 Elections were the prevalent topic of the week. Ukrainian websites dedicated more materials to it this week compared to previous week, while media from occupied changed their focus and produces fewer materials than during the last period. The former determines the tone and context of the coverage, while the latter provides scattered facts in support of their agenda. They actively spread information about declining support for “European Solidarity” (former president Poroshenko party). Additionally, media from occupied territories criticized parties of Vakarchuk, Lyashko, and Groysman as well as “Servant of the People” party. We spotted headlines proclaiming the high support for “Servant of the people” would allow it to form a majority government and eventually dictatorship (“Kravchuk scares Ukrainians with the perspectives of authoritarian and single-party rule”).

Materials related to Boyko-Medvedchuk-Rabinovich party and published in Ukrainian “junk websites” repeat Kremlin's theses: Ukraine should immediately start implementing the Minsk agreements (Russia and Ukraine have different readings of these agreements and Moscow accuses Kyiv of non-fulfillment), only Medvedchuk can reach stable peace, buy Russian gas and stop the impoverishment. Representatives of the pro-Russian opposition actively commented on the issues of gas transit and utilities, and also criticized the president for the war and continued the course of the previous government, including "political repressions." The same theses appear in media from occupied territories. Boyko-Medvedchuk-Rabinovich party is the only political organization in Ukraine which gets neutral coverage in these media. Additionally, they sympathize Portov because of his loss of the position in the university.

Media from occupied territories continue to repeat false allegations of shelling in Donbas. As in previous releases, this topic is steadily highlighted in occupation, but does not fall into Ukrainian news as mainstream pro-Russian sites and “junk websites.” Similarly, publications about Ukraine's fate at the international level do not find a broad response in Ukrainian disinformation "news." In the occupied territories, the media claim that Ukrainian allies got tired of the conflict, implying that the fate of Ukraine does not depend on Ukrainian politicians and people.

Traditionally, disinformers from the occupied territories and domestic “junk websites” synchronously distributed reports of the alleged imprisonment of Poroshenko. They wrote about insider's information regarding the confiscation of assets, the refusal of Medvedchuk to buy "Primyi" and Chanel 5. Websites from occupied territories complemented the slanders of the previous president by criticizing the current one. Zelensky is being accused of continuing the course of the former government, continuing the war and lack of initiative. However, they tend to link to Poroshenko every person of action they don’t like.

It is worth to mention the coverage of Putin's large press conference in Ukrainian pro-Russian media. strana.ua and golos.ua have covered the request to Putin to simplify the receipt of Russian citizenship to Ukrainians positively. As an argument, they used the emotional history of immigrants from the Donbas and high-quality, but free medical services. It seems that the Ukrainian media, sympathizing the aggressor country, are becoming more franker.

Blogger explained what Washington and Moscow are willing to get from each other for their deal about Ukraine | from-ua.com

Where do "attacked and burning" tankers go? | nk.org.ua (terrorist’s media)

Zelenski - criticism and disappointment. Zelenski does the same as Poroshenko

Vakarov: Zelenski doesn’t do anything new in his foreign policy he imitates Poroshenko | dneprcity.net

Shufrych: Europe hoped to see new Zelenski, but got only the old Poroshenko | smigid.com.ua

Rabinovich: A road to peace is closed under Zelenski presidency | 112.ua

"Zelenski, stop shooting, take troops away and get on the table with LPR and DPR"| rusvesna.su (terrorist’s media)

It takes only one step to get from admiration to aversion. The first month of Zelenski presidency sobered Ukrainians | ukraina.ru (terrorist’s media)

“A child is in a basement; a mother was scattered”. It's is a genocide | e-news.su (terrorist’s media)

The former head of CIA visited frontline before the shelling of Donetsk suburbs | e-news.pro (terrorist’s media)

Pavlenko: "Servant of the People" violated freedom of speech in Ukraine | bessarabiainform.com

One of the deputy candidates from “Servant of the People” is an activism Yurchenko who suggested to tore down the Russian school | strana.ua

One way or another. Members of Majlis of Crimean Tatars get into Ukrainian parliament with different parties | naspravdi.info (terrorist’s media)

Vakarchuk is expelled from “Holos”, another celebrity found to replace his | bbc-ccnn

Biletski: after the elections, all far-right groups should unite to fight pro-Russian politicians and corrupted supporters of Poroshenko | antifashist.com (terrorist’s media)

"Nayem is so toxic that nobody took him into the party list" Chechilo | ukraina.ru (terrorist’s media)

"On all fours in front of the parliament building": Lyashko gave a show in the center of Kiev, shots of shame | newsmir.info

Peace in Donbas, Zelenski does nothing for peace.

V. Medvedchuk: We go to the parliament to reach peace in Donbas | vybor.ua

Pushylin said that peace settlement in Donbas is in danger | versii.com

Zelenski as does nothing for peace, as Poroshenko did — Boyko-Medvedchuk-Rabinovich party | novosti-n.org

Head of DPR: Zelenski refusal to have a dialog with Donbas speaks about his short-sightedness | alternatio.org (terrorist’s media)

Filaret changed irreversibly due to his age | vlasti.net

Media: The USA prepare a split in the world orthodox church | newsmir.info

Rabinovich: Ukrainians stopped trusting new President; therefore they will vote for the party of peace | proua.com.ua

IMF wants to impoverish Ukraine and take away everything in had | ukraina.ru (видання терористів)

German Media: Medvedchuk can negotiate with Russia about the supply of gas | dneprcity.net

Both the old President and new to stop us | politeka.net

We searched for topics in 2069 manipulative news in Russian from 19 propaganda sites and 82 Ukrainian online media, which was revealed more than 10% of manipulative news from all news about Ukraine, total - 101 sites. Manipulative news was determined by an improved classifier from the project “We’ve got bad news!”.

Russia brandishes its arms, “riots” as in Kazakhstan are being prophesied in Ukraine. Disinformation monitor #111