Monitoring of topics of Russian disinformation. Issue #3. All attention to the elections

Manipulative news in Ukraine-oriented media and media from the occupied territories focused on future elections last week. The number of supposedly paid news are increasing, and media from occupied territories continue to represent the election process as a big circus. At the level of the elections, the disinformation of the separatists is aimed at the topic of war and coverage of Russia as a respectable subject of international relations, which, on a par with other powerful states, negotiates about the fate of Ukraine. 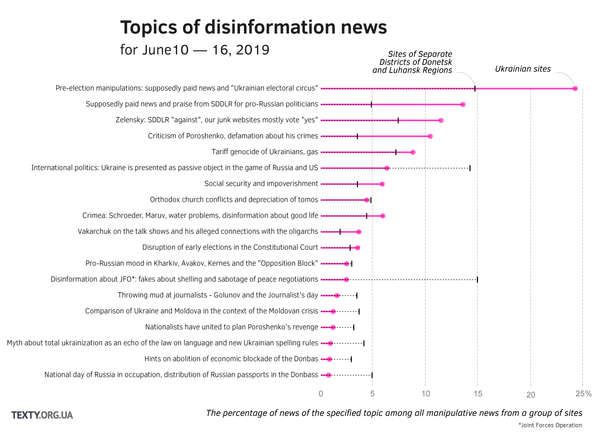 Media from the occupied territories devoted considerable attention to the election campaign. Except for the Boyko-Medvedchuk party, most political forces portray negatively. The elections represent in media as a farce and another confirmation of the thesis of Ukraine's worthlessness. The Kremlin's disinformation picked up the main political events of the week and presented it in a favorable light for themselves. On Ukrainian sites, manipulative news about elections often had the signs of supposedly paid news reports. “Junk websites” and media from occupied territories combine a mockingly-contemptuous attitude to the candidates and the electoral process. This style of news reduces the legitimacy of elections and polarizes society.

We identified a separate group of supposedly paid news reports in favor of the party Boyko-Medvedchuk-Rabinovich. Those materials appear most often in Ukrainian "junk websites". However, the terrorist’s media from occupied territories pick up these texts to elevate the role of this pro-Russian political forces. Materials containing criticism of Poroshenko and defamations about criminal accusation, speculation about his escape from the country are often combined with pre-election rhetoric, in order to reduce the outcome of his party ("European Solidarity") in the forthcoming elections.

Party of former president portrayed mostly negative, like a flock of revanchists and thieves. Kremlin disinformation through media from the occupied territories pays much attention to nationalist parties and calls them the striking force of Poroshenko revenge. The new political force of Vakarchuk is more covered in Ukrainian manipulative news, although news from occupied territories broadcast messages about his relationship with the former authorities.

Zelensky activities were more closely covered in Ukrainian manipulative news last week than in disinformation from occupied territories. Among the "junk websites", the opinions were divided: there is justification for his actions, arguments about the obstacles from the previous government, and there are clearly negative materials. The position of the media from the occupied territories seems uniform in the negative attitude towards Zelensky. They write that he continues the policy of Poroshenko, not ready for the presidency, weak and incompetent.

Most of the publications from occupied territories on Zelensky are negative

If in past monitoring we have seen positive and neutral coverage of the activities of the current president, then most of the publications about him from occupied territories last week were clearly negative. Neutral news from such media concerned the topics of gas. Zelensky was offered to listen to Medvedchuk and Co on the issues of transit and direct supplies of Russian gas. The gas issue, in general, became more popular last week and attracted a lot of materials with signs of ordering. In addition to raising the issue of transit and supplies of Russian gas, there were publications about the possible lifting of the economic blockade on the Donbas.

From the occupied territories, there is a stable flow of fakes about the shelling of the Armed Forces of Ukraine and the intra-Ukrainian conflict. Ukrainian online-media do not circulate them. Similarly, Ukrainian media do not repeat disinformation about good life in the Crimea. Instead, they mock over the deserted beaches and resent the behavior of the singer who did not answer the question "Whose is Crimea?" Those manipulative news on Ukrainian websites, which concerned the shelling or international politics of Russia, contained a language of hostility, speculation, or emotional vocabulary, but did not repeat the thesis of the Kremlin disinformation. These news reports are taken into account in the study because they have signs of manipulation.

Internet-media from the occupied Donbas continue developing the "eternal" theme of impoverishment, write about the distribution of Russian passports and threats to the Russian language. Except for the impoverishment, these topics do not resonate in Ukrainian "junk websites". "Total poverty and economic decline" in Ukrainian manipulative news are used to attack certain politicians, for example, members of the government. Also those media, continue to write about Filaret attacks on The Orthodox Church of Ukraine.

Last week topics showed the transition of "junk websites" and the media from occupied territories to the pre-election regime. In addition to stable topics about representatives of the current and former authorities, utilities prices and social sphere, war, Crimea and language, the topics of gas and economic blockade of the Donbas were actualized. Below you can see the list of selected topics and headings.

Poroshenko's supporter went to revenge "Servant of the People" cause of the new party member: "Burp of Soviet" | politeka.net
The political vane, Dmitry Spivak now runs to Zelensky: before that, he was begging in the BPP, Oppoblok and ran to bow to Rabinovich | bbc-ccnn
"Spitting, swearing, cursing." A shocking video of a Rada candidate from the "ES Poroshenko" appeared on the Web. | antifashist.com (terrorist’s media)
Poroshenko was predicted the failure of the election: "fly by Rada", a fatal forecast. | merezha.co
The object of jokes is becoming a partner. Tymoshenko in the fight for elusive premiership | ukraina.ru (terrorist’s media)

Overthrow of Zelensky before the end of the year: the plan of Paruby, Pashinsky, Poroshenko, and Co was declassified. | bbc-ccnn
Groisman seized the whole of Ukraine, Zelensky takes emergency measures: "I will batter, until ..." | politeka.net (in Ukraine one of the meanings of “batter” is “to use drugs”. This is a hint of Zelensky drug addiction)
Kornilov: Zelensky and his team do not know what to do with Crimea and Donbass | ukraina.ru (terrorist’s media)
No words. Why in the program "Servant of the People" do not have Donbass and Crimea naspravdi.info (terrorist’s media)
Party of Zelensky is not ready to assume responsibility for practical steps in the Donbass | metayogg.com (terrorist’s media)
Quarter 95 in Brussels: Both war and shame | e-news.pro (terrorist’s media)
Supposedly paid news and praise from occupied territories favouring pro-Russian politicians
Gavrilechko: Political persecution against Medvedchuk demonstrates whom the authorities consider the a significant opposition | from-ua.com
Yuriy Boyko: We have a comprehensive program for developing the transport potential of Ukraine | vybor.ua
Rabinovich: The group of Poroshenko with the help of tariffs robbed the people for tens of billions | proua.com.ua
KyivPravda: Rabinovich: If gas agreements with the Russian Federation are not signed by the end of the year, then our pipe will become scrap metal | kievpravda.com
Medvedchuk revealed the "most terrible" fact about Zelensky | nation-news.ru (terrorist’s media)
Boyko promised after the elections to initiate direct talks with Moscow and Donbass | antifashist.com (terrorist’s media)

Groisman’s and Kobolev’s vile scheme was shown to all of Ukraine: gas for the price of your tears | politeka.net
Today's gas tariffs for the population are artificially high - Boyko | replyua.net
"Opposition platform For life" demanded from ZElensky to abandon the corruption scheme "DuZEldorf+" | politeka.net
Ukrainian NGTS* will turn into scrap metal if the contract with the Russian Federation is not extended - expert | ukraina.ru (terrorist’s media) (*NGTS - Natural gas transmission system of Ukraine
Ukraine took the last place in the ranking of European countries on the availability of gas for the population | ukraina.ru (terrorist’s media)
Because of the policy of the Ukrainian authorities, gas prices rose by 1090 percent e-news.su (terrorist’s media)
Conversation with Russia in the language of ultimatums will leave Ukraine without gas | e-news.su (terrorist’s media)

Philaret: Epiphanius wants to liquidate the UOC-KP to take its money | spzh.news
The devil is at war with the Church through persecution, heresy, splits, - Metropolitan Onuphrius | spzh.news
Filaret about Poroshenko: "This is a terrible swindler. He believes in the devil, not in God" | glavk.info
"We do not accept this Tomos": Filaret planted a fat pre-election pig* to Poroshenko". (* “put a pig” = “to play somebody a dirty trick”) | rupor.info
Petya's Tomos ends smolder. Anatoly Wasserman | metayogg.com (terrorist’s media)
Bizyaev told whether Ukraine will lose the Tomos after the "resurrection" of the Kyiv Patriarchate | ukraina.ru (terrorist’s media)

Criticism of Poroshenko, defamation about his crimes

"Yes, we are critters, but ...": Poroshenko’s associates made a confession about large-scale violations of the ex-guarantor | newsmir.info
Poroshenko disgraced with scandalous "victory" in the US, there will be no more money: "I fought for five years for ..." | politeka.net
People's Deputy told for what Poroshenko can be brought to justice | replyua.net
Are you still laughing at Zelensky? "By the end of June all Poroshenko property will be confiscate", - the lawyer | merezha.co
Poroshenko sent to prison asked Zelensky for mercy | proua.com.ua
"We'll have to shoot the Ukrainians": Poroshenko went on a fatal provocation in the center of Kyiv | politeka.net
Poroshenko to discredit Zelensky prepares chaos and terrorist attacks in Ukraine antifashist.com (terrorist’s media)
Habit is second nature. Theft as the main feature of Poroshenko’s political force ukraina.ru (terrorist’s media)

The pro-Russian mood in Kharkiv, Avakov, Kernes and the "Opposition Block"

We searched for topics in 2069 manipulative news in Russian from 19 propaganda sites and 43 Ukrainian online media, which was revealed more than 10% of manipulative news from all news about Ukraine, total - 62 sites. Manipulative news was determined by an improved classifier from the project “We’ve got bad news!”.