Why Crimean Referendum is a manipulation: 10 facts you should know

Many people are talking about the referendum in the Crimea: Some condemn, some support, and some boycott. There is even an impression that some of the opponents really consider that this will be a referendum, i.e., that the residents of the Crimea will take part in the decision-making concerning the future of the peninsula. However this si not the case. On March 16 there will not be any referendum.

I would like to stress: There will not be any referendum. There will be a farce organized by Russia to make the impression of occupation of the Crimea by "people's will".

There are at least 10 reasons not to consider manipulations of the Russian occupants as a referendum.

A meeting of MP's, which voted for the referendum, was held in premises thrilled by Russian armed forces. Only those considered suitable by the invaders were allowed to enter the premises. Information concerning the quorum is contradictory. The voting was held in an isolated room, where armed men were present but no independent journalists were allowed.

5. Manipulations with the date and the formulation. The referendum was first appointed for the 25th of May. However, the Crimean Parliament has already changed the date twice (30th of March and then 16th of March). The formulation of the questioning has been changed as well ranging from contractual relationships with Ukraine to integration with Russia.

This variety of illegal, mutually exclusive, and absurd decisions is an evidence that the Crimean authorities do not intend to find out the people's will. Their goal is to fit the date and the formulation of the questioning according to the Kremlin's will.

Despite the occupation of the Crimea, a non-standard behavior of Ukrainian soldiers, a strong international reaction, and a growing thrill of Crimeans are forcing Moscow to speed up events and to change the scenarios. As a consequence, an illegal referendum from the very beginning becomes a complete farce.

Moreover, for the organization of the referendum only a week was granted (usually 2-3 month). Representatives of the Aksenov's "government" declare that the voting commissions from the last elections will be on charge. But according to which basis? What if those people are not willing to take part in the commissions? Not to say if someone is dead or ill.

7. Uncontrolled bulletins. How many bulletins will be there? How will they be delivered? Can bulletins be faked? No one knows, we can only rely on the declarations of the Head of the Crimean Central Electoral commission Mr.Malyshev. But even his declarations are contradictory.

8. Non-existence of the list of voters. It is clear that one of the most important issues for any referendum is the exact list of voters. The point is that there is no such a list for the Crimean "referendum". This is so since the Central Electoral commission of Ukraine blocked the access to the register of voters because the "referendum" is illegal. Thus the separatists can not obtain the current list of voters even if they would like to.

Therefore the "government" of collaborators declared that the referendum will be held according to the lists of voters from 2010. It is clear that such lists of voters are very imprecise and it is not even clear when these will be available for the electoral commissions. Given that for the preparation of the referendum only several days instead of several months are available, neither members of the electoral commissions nor voters can check the lists of voters. Apparently, this is not the goal of the organizers of the show.

9. Lack of free choice. A real referendum is not just about coming to an electoral place and putting a tick. A referendum implies a possibility for a campaign and a freedom of choice. Can we talk about any campaign if there are just several days left before the voting starts? Can we talk about any campaign if armed partisans of Russian occupants terrorize anyone willing to support the choice of remaining in Ukraine?

Those campaigning against are being threatened and beaten. Leaflets are being destroyed and information channels are brutally blocked. Can there be any freedom of choice at gun points?

The formulation in the bulletin itself is mocking. There is no possibility to vote for the current status quo, since one can not vote against both items in the bulletin. One can choose just one item (for being part of Russia and for the Crimean Constitution of 1992) and any of these options will have essentially the same consequences.

Given that all law-abiding citizens of Ukraine recognize the referendum as illegal, those organizing the referendum will be partisans of the Russian occupation. Independent observers are out of the question: Local opponents of the referendum are persecuted and unwanted foreigners or Ukrainians from the rest of Ukraine are simply not allowed to enter the Crimea.

Moreover, international organizations, which recognize the referendum as a farce, refused to send their representatives. It is at least naive to expect that those seizing part of the Ukrainian territory with the help of guns will count real votes and fill in fairly the protocols. After all, this does not have any sense because of lack of the law, which would regulate the process.

When is the referendum successful? How many people must come for that to the voting places? How many people must vote "for" (after all, it is impossible to vote "against" as it was already mentioned above)? How will be the result established? What will be the legal effects of the referendum? One can ask all these question only "green men" with guns.

Thus, there are no reasons to consider the show, which is organized by Moscow on the 16th of March, as a referendum. This show is not only illegally appointed and organized, but also does not have anything in common with free choice and fair count of voices.

Taking into account traditionally low turnout in the Crimea (the turnout on the last parliamentary elections in 2012 was 49%) and appeals of the opponents of the occupation to boycott the referendum, most probably much less than a half of the population will take part in the referendum.

It is also unclear whether electoral commissions will function everywhere (some local authorities did not recognize the referendum). But the organizers of the farce do not care. The results of the "people's will" is known to them beforehand, it remains only to fill in protocols.

We will never know how many Crimeans will come to vote and how they will vote. Instead of this we will see on the screens of Russian TV huge queues on voting places and heaps of bulletins with ticks for the "reunion with Russia".

This is whatever you wish but definitely not a referendum.

This is not the first time such farces are played. The most obvious analogy is March of 1938. Adolf Hitler after the occupation of Austria for the sake of "defense of German-speaking fellow countrymen" obtained 99% of votes at gun points for the reunion with Germany. No one will ever know how many those votes were there in reality. 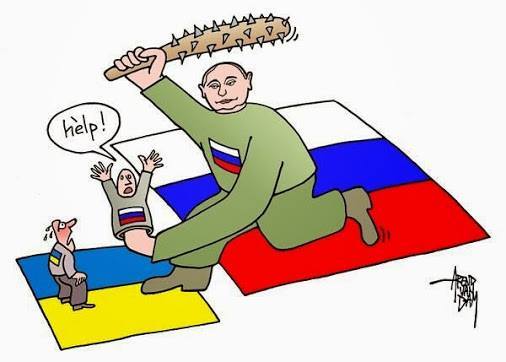