Disinfo from Russia. Issue #16. "Overthrow" of Zelensky, the "klepto-army of Ukraine" and the Nazis attack.

Neo-Nazism prevails in Ukraine, and sexual perverts are in power. Disinformers have come to such conclusions, interpreting all the scandals surrounding MPs. One quote from Lukash (minister of justice in times of Yanukovych) turned into a series of articles about the possibility of Zelensky's overthrow. And the troop withdrawal has been "decorated" with outright fakes about shelling, discrediting of the Armed Forces and scary stories about armed nationalists. The results of the scandalous opinion poll in the Donbas were also disseminated: “Ukraine is in shock: the survey showed ...” 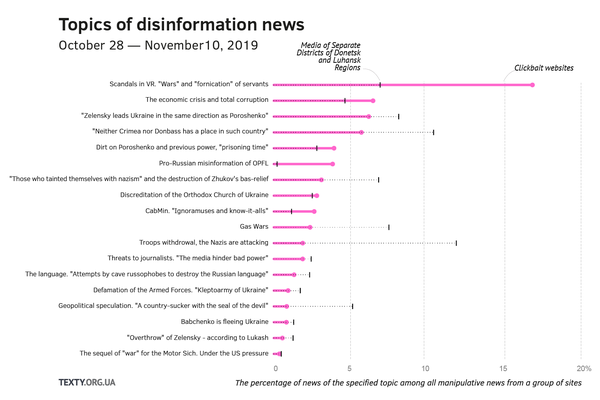 Elena Lukash's phrase on the 112 channel was picked up and duplicated by both manipulators and disinformers. The headline "Overthrow Zelensky is prepared in Ukraine — ex-minister" works wonderfully both as a clickbait and as a reinforcement of the beloved thesis of Russian disinformers about Nazis-terrorists.

Terrorist media from occupied territories do not stop reminding that Zelensky's team is "finally slipping into nationalism". They also keep over-demonizing nationalists themselves. For example, “Wickedness walks around the country” and “Scarecrow with flashlights” (about the concept of the Heavenly Hundred Memorial).

"After Zelensky’s trip to the JFO zone, everyone wants to know who he is — a boor or a sucker".

“This week there were a lot of puns with the word “withdrawal” [in Russian slang also means a fraud — Texty]. In the jargon sense. Instead of the withdrawal of troops promised by Kyiv from the line of contact — again a swindle performance. What criminals are called a withdrawal. Not only European leaders are made suckers, waiting for the promised fulfillment of the Minsk agreements by Ze. But also all the people of Ukraine! Where a replacement for Zelensky is slowly being prepared.”

The split and "wars" in the Servant of the People party continue. “KVN” (popular humor show), “Uncle Benya” (one of the aliases of Igor Kolomoisky), “Soros's Homunculi” are just some of the fictional names for hypothetical influence groups within the party.

Disinformers instantly catch on to all scandals taking place in the Verkhovna Rada and disseminate “news” about them. Tyshchenko's communication with pranker, Yaremenko's messaging with women involved in commercial sex, and even Kiva's tricks — everything is used to reinforce pro-Russian theses. Here are just some of their "logical" conclusions:

“If our prime minister is a neo-Nazi (he goes to neo-Nazi concerts), and the head of the international committee is a sexual pervert, then ... we have something wrong with the authorities”

"The Ukrainian authorities are mired in eternal scandals, neo-Nazism and sexual perversions."

It should be noted that a large part of the materials on this topic on Ukrainian manipulative sites is caused not only by the spread of disinformation but also the desire for low-profile media to attract the audience via clickbait headlines and scandals such as Yaremenko's messaging. The disinformation detection algorithm responds to such emotional materials, but they are not always disseminated for the purpose of disinformation.

Another example is the sites of Znaj Media Holdings, which actively promoted Andriy Palchevsky during the monitoring period, giving his comments on all possible events in Ukrainian politics, including in VR. In his statements, we noticed a recurrence of Russian disinformation.

“Servant of the People” is a classic example of an allegedly “non-ideological” party, which is actually a light version of BPP and Poroshenko. But you really can't be a neo-Nazi a little.”

Troops withdrawal, the Nazis are attacking

Disinformation continues to wreak havoc and criticize everything Ukrainian, using controversial theses. For example, troop withdrawal is the beginning of the end for Zelensky. Also, troop withdrawal ignores public opinion and leads to a fall in the president’s ranking. At the same time, disinformers believe that most Ukrainians want peace and troop withdrawal.

They spread the thesis of the potential loss of visa-free travel because of actions of nationalists and produce frank fakes. For example: “Ukrainian nationalists arriving in the village of Zolotoye under the guise of volunteers are conducting provocative shelling of the positions of the Armed Forces of Ukraine and the Militia of the LPR using weapons from the cache.”

“Residents of the DPR called on the Russian Federation to stop the Ukrainian army due to a sharp exacerbation in the Donbas”.

Defamation of the Armed Forces. "Kleptoarmy of Ukraine"

Leaks of information, catering in the Armed Forces, "bestial conditions" of the border service, preparation of fake explosion of ammunition depots (archive) — here is a partial list of topics that have been spread around the Armed Forces.

In addition, disinformers were preparing the ground for Marchenko's arrest (“The protege of the patented swindler Biryukov”). He allegedly continued the old shenanigans, "cynically incriminating a new Minister of Defence".

Neither Crimea nor Donbass has a place in such country

Disinformers have already begun to replicate the scandalous poll in the Donbass: "Ukraine is in shock: a survey showed who the residents of Donbass trust most of all." As expected, they rejoice in trust in Putin. The research is called sensational, and respondents are described as "the inhabitants of the unconquered Donbas ".

Describing the continuing conflict in the Kerch Strait and the confrontation between the Russian and Ukrainian Ministries of Foreign Affairs, they ridicule the Ukrainian side.

“Ukraine has already tired everyone and should be eliminated”

Zelensky leads Ukraine in the same direction as Poroshenko

“The whole world heard!” Russia got into the Zelensky scandal with “Azov”. Statement | newnews.in.ua

Nebozhenko: “After Zelensky’s trip to the JFO, everyone wants to know who he is — a boor or a goof” | ukraina.ru (terrorist’s media)

A good minister should have 10-15 years of experience, but this does not reach Zelensky — Azarov | ukraina.ru (terrorist’s media)

Chained by one NATO: Zelensky leads Ukraine to the same place as Poroshenko | nk.org.ua (terrorist’s media)

Troops withdrawal, the Nazis are attacking

Sergei Levochkin: Troops withdrawal in Petrovske and Bogdanovka will be another step towards peace | dneprcity.net

Military expert: Speaking about yesterday’s high treason, I have only two options | from-ua.com

Ukrainian nationalists attacked Zelensky and promised to blow up the president of Ukraine | nahnews.org (terrorist’s media)

Foreign Minister of the DPR Nikonorov: Troops withdrawal in Petrovsky can happen on any date agreed with us | e-news.su (terrorist’s media)

The withdrawal of forces in the Donbass, NATO examines Zelensky, the oligarchs get poorer | naspravdi.info (terrorist’s media)

"Unarmed volunteers" arrive in the Donbass: the Nazis began to attack the positions of the Armed Forces and the LPR | rusvesna.su (terrorist’s media)

Residents of the DPR called on the Russian Federation to stop the army of Ukraine due to a sharp exacerbation in the Donbass | nahnews.org (terrorist’s media)

In OPZZ criticized Zelensky's policy: this is the glorification of fascism | znaj.ua

Trukhanov is angry at the Ministry of Defense: demolition of a bas-relief of Zhukov — spitting in the face of Odessa residents | timer-odessa.net

The Odessa people's deputy opposed the replacement of the bas-relief of Zhukov with a board JFO veterans | timer-odessa.net

“Scarecrow with lanterns”: the concept of the “Monument to Heavenly Hundred” was approved | rusnext.ru (terrorist’s media)

The people's deputy Buzhansky promised to develop and introduce a bill banning the honoring of people who stained themselves with Nazism | e-news.su (terrorist’s media)

The radicals who demonstrated the bas-relief to Zhukov sent the inhabitants of Odessa who defended it to Russia | antifashist.com (terrorist’s media)

How nationalists fight the Marshal of Victory throughout Ukraine | naspravdi.info (terrorist’s media)

Defamation of the Armed Forces. "Kleptoarmy of Ukraine"

The protege of the “patent fraudster” Biryukov Marchenko continues the old fraud, cynically substituting the new Minister of Defense. | ukranews.life

Kyiv officials of the Ministry of Defense, despite the enormous cost overruns, continue to promote catalog food | verhovenstvo.com

An officer of the Ukrainian army spoke about a massive leak of information in the Armed Forces | nahnews.org (terrorist’s media)

Armed Forces are preparing explosions of ammunition depots: a report from the Donbass | rusvesna.su (terrorist’s media)

Ukrainian Marines complain about "bestial conditions" of service on the border with Crimea | nahnews.org (terrorist’s media)

Soldier of AFU out of jealousy bring down the tank commander: summary of the military situation in the DPR | rusvesna.su (terrorist’s media)

In the Security Council of Ukraine proposed to train in schools intelligence, signalmen and partisans. | naspravdi.info (terrorist’s media)

We searched for topics in 7309 manipulative news in Russian from 18 propaganda sites and 61 Ukrainian online media, which was revealed more than 10% of manipulative news from all news about Ukraine, total - 81 sites. Manipulative news was determined by an improved classifier from the project "We’ve got bad news!".