Fresh disinfo from Russia. Issue #14. "Neo-Nazis are preparing the Third Maidan", "Zelenskyi has no real power"

For two weeks disinformers paid their attention to the Steinmeier formula. Protests against the capitulation were presented as the next “Third Maidan” organized by neo-Nazis led by Biletskyi. At the same time, they talk about the collapse of Ukraine's position in the international arena, which entails the loss of sponsors for this Maidan, making it impossible. Disinformers wrote that Zelenskyi was losing power and his party was in crisis. They argued that representatives of the previous government were in danger because Zelenskyi controlled the courts, and Pashinskyi's case was only the beginning of the "imprisoning wave" 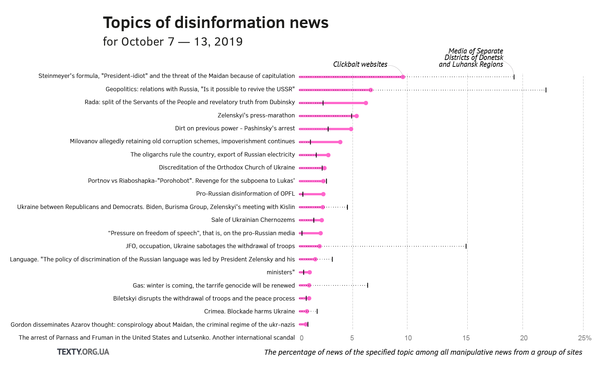 Steinmeier formula, armed "neo-Nazis" and the threat of Maidan because of capitulation

Following the rumors about the signing of the Steinmeyer formula, Ukraine, Russian disinformation told that the next Maidan was looming. Any actions of the opponents of the formula are discredited. Allegedly, they cannot substantiate their position and generally use Steinmeier's formula as a convenient reason to provoke social unrest, restore their reputation (especially in the case of Poroshenko), and to decrease Zelenskyi's support in Ukraine. They spread the idea of the difference between the new Maidan and the previous two: "This time, well-trained evil armed Nazis will be brought to the Maidan. And everyone will get more what they asked for!" But in other pieces, the Maidan was questionable because "Maidan is a coup d'etat organized by foreign intelligence agencies using local nationalists", and other countries were interested in resolving the Donbas conflict.

At the same time, they actively intimidated with Biletskyi and armed nationalists. Biletskyi, according to the rhetoric of disinformers, is Avakov's "neo-Nazi trump card." According to them, nationalists were the only obstacle to the withdrawal of troops in the Zolote: "the Nazis broke into the Donbas with shooting".

“Politicians immediately tried to saddle the discontent — Yulia Tymoshenko and, of course, Petro Poroshenko in front of whom looms the prison and who wants to actually turn a future lawsuit against him from a “trial against a corrupt official” into a “trial against an opposition leader who opposed the surrender of Ukraine to Putin”. 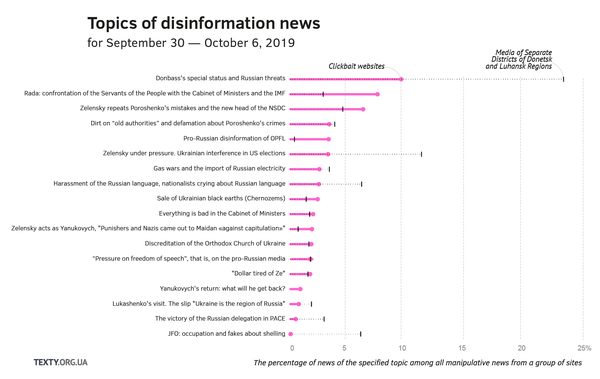 The disinformers from occupied territories assured the readers that over the last six months there was a collapse of Ukraine's foreign policy positions. The demarche of the Ukrainian delegation in the PACE was called political suicide. It was supported by a quote from Macron with a greeting to the Russian delegation. Besides, Ukraine, as they said, "made the most of MEPs very tired". Among the main causes of tiredness were corruption (one of the biggest in the world), unsuccessful criticism of the "party of war" and attacks on previous power, profiteering from war (the logic is the following: they did not fight for the Crimea, so the war for the Donbas must enrich someone) and words and actions of the "ultra-patriots, JFO veterans and leaders of the remaining volunteer groups". Also, new disinformation has emerged about the MN17 catastrophe: the Netherlands was allegedly going to investigate Ukraine's role in it.

Rada: split of Servants of the People and another revealing truth from Dubinskyi

The thesis about the decline of Zelenskyi's power was reinforced by texts on the crisis in the party "Servant of the People". The "Servant of the People" party was depicted as amorphous, unprofessional, divided into groups, almost unmanaged, and, in general, as only fiction and imitation of political force. Most often they cited criticism of the party by Dubinskyi and, as a result, distinguished the "people of Kolomoiskyi" inside the party and their criticism of the Ukrainian "groveling before the IMF".

“Nobody likes Prime Minister Alexei Goncharuk. Sometimes it feels like they put him to fire him after six months and place all sins on him.

PM's seat was promised to so many”

“Dubinskyi believes that the huge influence of the IMF, on the one hand, is the result of a huge debt burden, and on the other, a convenient disguise for decisions on the sale of Ukraine.”

Disinformers did not miss the press conference of Zelenskyi as well. He was ridiculed for his incompetence and the new world record (of the longest press-conference). They also have concluded that he pulled the wool over the world community's eyes about "unprecedented openness of the Ukrainian government". The name of Biletskyi also appeared here as evidence that Zelenskyi did not have real power.

“And, of course, the Book of Records does not give a damn about the fact that only rigidly filtered and almost 100% loyal media were admitted to the president, those who follow the script and fears weaning from the "feeding nipple".

"Marathon-show by Zelenskyi, I think, had the only purpose: to distract society from the fact that Zelenskyi has no real power. Biletskyi's arrival in Zolote and disruption of withdrawal of troops — sounding and clear evidence of it"

Zelenskyi's lack of power suddenly turned into Pashinsky's arrest as a signal to Poroshenko's team that "the first attempts to rock the situation in the country will lead to a violation of the agreements and the mass imprisoning of former top officials and politicians". Because, according to the logic of disinformers, it is the president who controls all the banks and courts. There are many publications in which a new criminal case was opened against Poroshenko, Lutsenko was fleeing the country, Suprun was also fleeing, but with millions of dollars.

"[Pashinsky's arrest — TEXTY] this is a signal for the Poroshenko team: the first attempts to rock the situation in the country will lead to a violation of the agreements and the mass imprisoning of former top officials and politicians".

Steinmeier's formula and the threat of the Maidan through surrender

Putin just caught Zelensky, and made him, as I don’t know whom - AFU officer | antikor.com.ua

The ghost of the new Maidan, the new secretary of the NSDCU, the "fake" case against Guzhva: the recognition of Mosiychuk | strana.ua

The coordination of "Steinmeier’s formula" means that Medvedchuk confirmed his status as a political strategist, - Kalinichenko | golos.ua

SSU against the "yellow blindfolds." How authorities and nationalists prepare for "Steinmeier-Maidan" | nk.org.ua (terrorists’ media)

Zhirinovsky: In the "Steinmeier formula" I do not like its author. He is a traitor | ukraina.ru (terrorists’ media)

Will the new Maidan win in Ukraine: a view from Kyiv | e-news.su (terrorists’ media)

Zelensky must suppress the riot of the nationalists | rusnext.ru (terrorists’ media)

Bondarenko told why Zelensky is waiting on October 14 to implement the "Steinmeier's formula" | ukraina.ru (terrorists’ media)

Shesler: Ukraine, like a blind nag, walks in a circle tied to a column of Russophobia | antifashist.com (terrorists’ media)

Terrible nationalists. Beletsky disrupts the withdrawal of troops and the peace process

Biletsky urgently turned to Zelensky and revealed the truth about the withdrawal of troops in the Donbass: details | newsmir.info

Nationalists will not be able to conduct military operations in Zolote if troops are withdrawn from there - Mikhailenko | replyua.net

“Are you idiots?” Chief of the General Staff Khomchak fell into scandal with surrender | for-ua.life

Biletsky beat Avakov: the fate of the Minister of Internal Affairs depends on radicals and nationalists | ukraina.ru (terrorists’ media)

Ruslan Bortnik: in the eyes of Europe and the OSCE, Ukraine has become an unreliable partner | alternatio.org (terrorists’ media)

The nazis broke into the Donbass with shooting: why Zelensky is silent? (VIDEO) | rusvesna.su (terrorists’ media)

"We will not give Putin not a meter of Ukrainian land." Chronicles of the diving Ukraine | antifashist.com (terrorists’ media)

"I believe that you are the people of the word." Biletsky called on radicals to lead people to Donbass | ukraina.ru (terrorists’ media)

Statement “Opposition platform - For Life”: refusal to work in PACE is another step towards political self-isolation of Ukraine | most-dnepr.info

Demarche in PACE: expert explained how Ukraine hurt itself | ukr.life

Template break: the Ukrainian delegation to PACE can not decide whether they needs Russia | rusvesna.su (terrorists’ media)

Pushkov: “Attempts to ignore Russia are harmful to Ukraine itself” | ukraina.ru (terrorists’ media)

Pushkov called the words of Macron about Russia in PACE as an answer to the Ukrainian and Baltic “demarches” | nation-news.ru (terrorists’ media)

"In the hall they said oh": The deputy decided to shock the European Parliament with delusions about Russia and Ukraine | rusvesna.su (terrorists’ media)

Lukashenko: In the Donbass is not a civil war, but the Russian-Ukrainian | newsland.com (terrorists’ media)

“Why Ukraine and Russia did not fight in Crimea? Why didn’t Ukraine even try to fight? ”Opinion of foreigners | e-news.su (terrorists’ media)

Zelensky at the food court

Pogrebinsky: Zelensky was forced to lie directly during the press marathon | akcenty.com.ua

The pack played the King: who is in the team of Zelensky | nk.org.ua (terrorists’ media)

Even Yanukovych didn’t allow himself that: the President’s Office did not want to see Sonya Koshkina at the Zelensky press marathon | crisis.in.ua (terrorists’ media)

Zelensky, as during the election, appeals to the emotions of his electorate - Korneychuk | ukraina.ru (terrorists’ media)

Ze-marathon turned out to be an attempt to outspeak Putin and Lukashenko | antifashist.com (terrorists’ media)

Zelensky has no real power - and this is already a medical fact | nk.org.ua (terrorists’ media)

Rada: split of Servants of the People, accusatory truth from Dubinsky, confrontation with Cabinet of Ministers

A. Yakubin: “Repressive language policy can play a bad joke with the President” | golos.ua

Dubinsky called the bills being drafted in the former Goncharuk Office as “fucking” | ukranews.life

Dubinsky from "Servants of the People" rebuked Zelensky: "Exactly we made them, and not they us?" | znaj.ua

“From the point of view of an optimist”: Why do not “servants of the people” serve the people? | ukraina.ru (terrorists’ media)

Riot of the servants. How the IMF, Kolomoisky, Steinmeier and money for the districts splits the president’s faction | nk.org.ua (terrorists’ media)

In Zelensky’s team, no one likes Goncharuk, and Bogdan fights with everyone - Tsarev | ukraina.ru (terrorists’ media)

As soon as the IMF can’t milk Ukraine, it will let it go for meat - Ishchenko | ukraina.ru (terrorists’ media)

Oleinik: There is no party “Servant of the People”, therefore it cannot disappear | ukraina.ru (terrorists’ media)

Dirt on the previous power

Leak from the GPU: There is actively preparing suspicion for a high-profile article for Poroshenko - media | ukrainianwall.com

Why is ex-president Poroshenko still not questioned in the Ilovaysk case? - Semen Semenchenko | ua24ua.net

Petro Poligrafovich Poroshenko: why the fifth president does not go to interrogations | naspravdi.info (terrorists’ media)

"Foreign journalists in shock": Ex-Prosecutor General Lutsenko escaped from Ukraine amid scandal in the US | rusvesna.su (terrorists’ media)

Khodakovsky: Do not expect the current heirs of the Maidan to arrest Parubiy | ukraina.ru (terrorists’ media)

Tatyana Chornovol was going to defend with an assault rifle Pashinsky and Ukraine | comitet.su (terrorists’ media)

Portnov: We will do everything so that Poroshenko becomes the next client of the pre-trial detention center | comitet.su (terrorists’ media)

We searched for topics in 6750 manipulative news in Russian from 18 propaganda sites and 61 Ukrainian online media, which was revealed more than 10% of manipulative news from all news about Ukraine, total - 81 sites. Manipulative news was determined by an improved classifier from the project "We’ve got bad news!".