Disinfo from Russia. Issue #13. Militant Ukrainian authorities, “a bunch of no-names” in the Cabinet of Ministers and the return of Yanukovych

Disinformers continue to discuss militancy of Ukrainian authorities and its persistent reluctance to conclude peace, and the potential of Steinmeier formula. Zelensky, in the reality they are actively creating, has tried unsuccessfully to please Trump. After a speech at the UN General Assembly, the Ukrainian President was accused of disinformation with a "propaganda tinsel." It has also emerged that a strong hryvnia is the result of a plot by the NBU, and Yanukovych may soon return to Ukraine. 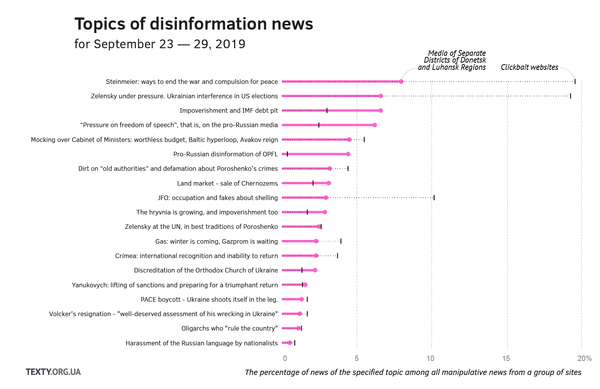 Zelensky’s trip to the US, his meetings with Trump, and the transcript of their conversation before that received a lot of attention. Comparison of Zelensky with Monika Levinski (a participant in the sex scandal with Bill Clinton) was actively promoted in both the Ukrainian manipulative media and in outlets from occupied territories. They mentioned the words of Zelensky's dissatisfaction with Angela Merkel's actions (predicted the potentially devastating consequences of these words for Ukraine) and drew attention to his unsuccessful attempts to please Trump. The leaked talk became an argument for Russian disinformation in the reinforcement of its old statement to Ukraine's dependence and "external governance".

The transcript of Zelensky's conversation with Trump was also linked to Volcker's resignation. Disinformers did not forget to blame Volker for all the previous failed talks on the peaceful settlement of the conflict in the Donbas and the rash support of Poroshenko's course.

Steinmeier formula and compulsion for peace

Most of disinformation of the week concerned the peaceful settlement of the Donbas war. As in previous editions, terrorists’ media convinced that Ukraine should simply start to implement the Minsk agreements and "ignore the tantrums of the "party of war". In addition to direct motives, they recalled the benefits for the West from ending the war: "Europe is tired of Ukraine". Pro-Russian media urged to adopt Steinmeier formula, for example, the Ukrainian site quoted Pushkov: "Kyiv does not want to accept it? Will remain without a formula and without Donbas" (archived material). Medvedchuk also joined disinformation about the topic: "Medvedchuk: Understanding the" Steinmeier formula" by Ukraine and some members of the Normandy Four is different today" (archived material).

Poroshenko's name appears whenever mentioned Zelensky's speech at the UN. On the contrary, disinformers from occupied territories more often wrote that Zelensky is a pale copy of Poroshenko, and his speech was a "propaganda tinsel", although the "methodology of speech" remained the same as that of Poroshenko: to say that Russia is the aggressor and to show material evidence. They called his speech disinformation and many discussed what a bullet he had demonstrated before the General Assembly. The president was mostly criticized on Ukrainian manipulation sites, including blaming him for failing to look like Holoborodko (his character in TV series about ideal president).

The topic of "impoverishment" was emphasized by two informational reasons. The first was negotiations with the IMF, which ended unsuccessfully because of Zelensky’s connections with Kolomoisky. The second was the fluctuation of the hryvnia, the strengthening of the Ukrainian currency was interpreted negatively. The increase in the hryvnia exchange rate was explained as a result of the failure of the state budget. As the strong hryvnia did not fit into the rhetoric of impoverishment, it was supplemented by arguments about the absence of new jobs, the stagnant economy, the constant rise in prices and external debt. And they came to the expected conclusion of a grandiose plot at the National Bank. As if the NBU has levers "to convince major players not to show increased interest in the American currency for a while", threatening to put administrative pressure in case of non-compliance with the rules of the game.

Another constant topic that has been updated recently is the sale of Ukrainian black earth (Chernozems). It was actively promoted by OPFL and Medvedchuk personally, providing "necessary" quotes. This time it is the IMF requirement for land reform (and tariff increases) as a "mockery of Ukrainian citizens". Disinformation about the purchase of Ukrainian lands by foreigners was supplemented with the claim that after the opening of the land market from all over Ukraine "will come gangs of armed "patriots", who persuade landowners to "sell" it".

Mockery of the Cabinet of Ministers

Concerning the assessment of the Cabinet of Ministers, disinformation from occupied territories combines two mutually exclusive topics: 1) Ukraine needs new people to replace old corrupt officials, 2) new faces, for example, among the deputies of the Minister of Internal Affairs Arsen Avakov will neutralize the work of professionals and provoke "the outflow of a remnants of the old personnel who have some achievements, those who know how to work in this area". Or, new faces are exhibited solely as puppets. In other words, previously the main positions were occupied personally by the "Ukraine owners", and now it is "the national team of not even known to each other nobodies". Disinformers did not forget to make fun of Goncharuk through his phrase of connecting the Baltic and Black seas by water, drawing a parallel with the Omelyan’s (ex-minister of infrastructure) hyperloop. The abovementioned is embedded in the familiar to Russian disinformers trend of a devaluation of whatever Ukrainian authorities.

Disinformation as "freedom of speech"

Pro-Russian media continued to write about "harassment of freedom of speech", keeping in mind the pro-Russian media in Ukraine. They were also supported by terrorists’ websites. In the discourse on the harassment of freedom of speech, disinformers cited criticism of the situation by "experts" — unknown in Ukraine Member of the European Parliament and "British media" without reference to primary sources.

After the Court of Justice of the EU lifted personal sanctions against Yanukovych, a large number of clickbait headlines about his return appeared on Ukrainian sites. Although in the text it was regarded as an impossible scenario. The disinformers had the same opinion, however, they used this as an excuse to fantasize about the past government's potential reaction to Yanukovych return and their unbearable desire to impose sanctions on him.

Ways of ending the war and Russian threats

“They will remain without the Donbas!” In Russia threatened Ukraine because of the “Steinmeier formula” | kordon.org.ua

A. Bodrov: “Ukraine will be forced to focus on the warming of European and American relations with Russia” | golos.ua

Voloshin advised the Foreign Ministry not to pay attention to the tantrums of the "party of war" | ukraina.ru (terrorist media)

Against the Ukrainian ambassador Deshchytsia, the State Bureau of Investigation opened the case for the obscene insult to Putin | e-news.su (terrorist media)

Zelensky under pressure. Ukrainian interference in US elections

Poll: How will the “Ukrainian case” affect the US presidential election | beztabu.net

Zatulin explained exactly what Europe should help Ukraine but still does not do. | ukraina.ru (terrorist media)

Zelensky between a donkey and an elephant | rusnext.ru (terrorist media)

Like a movie! F*ck you... and this condition is mandatory! It looks like Ukraine blew the IMF off | ua24ua.net

“We don’t need your money”: Savchenko proposes to refuse assistance from US | ukraina.ru (terrorist media)

Due to the appetites of the Kolomoisky IMF put Ukraine on hungry rations | antifashist.com (terrorist media)

"Money or Kolomoisky." Why the authorities did not agree with the IMF and whether now it is necessary to declare default | nk.org.ua (terrorist media)

Zelensky at the UN, in best traditions of Poroshenko

Speech by Zelensky at the UN did not understand | u-news.com.ua

How Zelensky differs from Goloborodko: there is only one nuance | ua24ua.net

Sergey Gayday: The most terrible fears about Zelensky are confirmed | dneprcity.net

The magic of Zelensky’s victories no longer works: Romanenko explained the reason | znaj.ua

Pushkov called Zelensky with a bullet at the UN as "pale copy" Poroshenko with a broken flag | nation-news.ru (terrorist media)

Montyan firmly put Zelensky to his place after Russophobic ravings at the UN | rusvesna.su (terrorist media)

Oleynik: Zelensky should not have fallen to the level of cheap Poroshenko tricks | ukraina.ru (terrorist media)

“One artist succeeded another”: the Federation Council of the Russian Federation responded to Zelensky’s performance with a bullet | rusnext.ru (terrorist media)

Zakharova called the bullet demonstration by Zelensky at the UN an example of disinformation | rusnext.ru (terrorist media)

The hryvnia is growing, and impoverishment too

Andrey Novak: There will be no low prices, popular products will go up in price | ukraina.ru (terrorist media)

The conquests of the Ukrainian Maidan in terms of loaves of bread | naspravdi.info (terrorist media)

Anton Gerashchenko appointment to the Ministry of Internal Affairs is Zelensky delicious spit in the face of his constituents | ua24ua.net

Medvedchuk: the absurd idea of Goncharuk to dig through the Black Sea-Baltic canal eclipses Hyperloop | dneprcity.net

Medvedchuk: The budget from the current Cabinet of Ministers is no different from the budgets of the governments of Yatsenyuk and Groysman | bessarabiainform.com

Avakov will surely “leave"*, it is only a matter of time - Zolotarev | ukraina.ru (terrorist media) [*means - someone will tell him to leave]

Operation "Ы"* and other adventures of Lesha | rusnext.ru (terrorist media) [*means - reference to the name of the Soviet film]

The budget of Goncharuk is similar to the budgets of Yatsenyuk and Groysman - Medvedchuk | ukraina.ru (terrorist media)

We searched for topics in 2791 manipulative news in Russian from 18 propaganda sites and 61 Ukrainian online media, which was revealed more than 10% of manipulative news from all news about Ukraine, total - 81 sites. Manipulative news was determined by an improved classifier from the project "We’ve got bad news!".