Restriction of the research: We take the topics of Russian propaganda in Ukraine exclusively from online media that are written for the population of the occupied territories (we will call them "media from occupied territories (SDDLR)", for convenience), and from the Ukrainian so-called "junk websites". Under the term "junk websites" we mean online media, which are designed for the Ukrainian audience and publish a large number of manipulative news of different ideological orientation. In this research we considered only those news that are consonant with Russian disinformation campaigns.

Russian disinformation media from the occupied territories and Ukrainian "junk websites", as in the previous monitoring period, wrote a lot about the war on the Donbass, about president of Ukraine Volodymyr Zelensky and international politics. In the Ukrainian "junk websites" we found a significant number of supposedly anti-corruption publications such as "thief, criminal, deputy". According to our research of this segment of the media environment, this is a traditional subject for such media. However, such materials about the members of the BPP (Poroshenko’s party) and the encirclement of the former president are currently consonant with Russian disinformation. 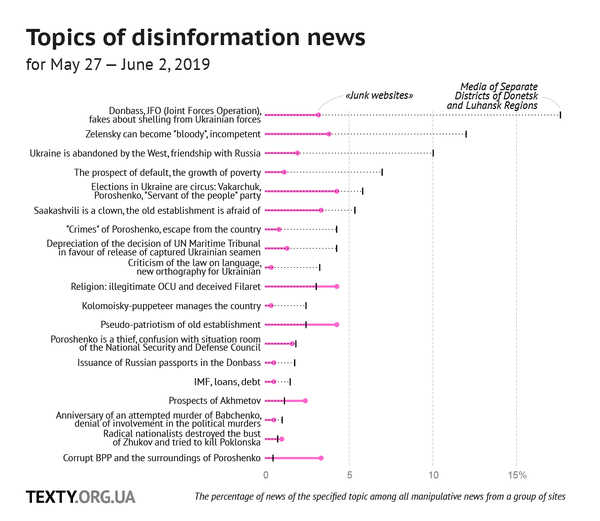 As in the previous monitoring period, media from the occupied territories published their traditional fakes about “shelling of the Armed Forces of Ukraine of the civilian population", "punishers of SSU" and “parquet” pieces about the activities of top fighters and the good life of the local population.
Sites from the occupied territories write about Zelensky either neutral, showing how difficultly he copes with the country, old establishment and critics, or negatively.

They already see the continuation of the previous course of Ukrainian government in his policy and cast doubt on his intentions to stop the war in Donbass at any cost. We found the materials with phrases "blood clown" and "blood trampling" in the titles. The manipulative news from "junk websites" repeated the myths of Russian misinformation that Zelensky is a puppet president and how hard it is for him to resist the “porohobots”.

Sites from the occupied territories also wrote a lot about the oligarch Igor Kolomoisky as a "gray cardinal" of the new government. This topic helps them to portray Ukraine as "fail state", and its political leaders as weak puppets. A particular issue related to Kolomoisky was a possible default (the oligarch mentioned in an interview for the Financial Times that Ukraine should declare default) and, as a consequence, the growth of poverty of Ukrainians. Sites from the occupied territories were speculating on the issue of default more often than Ukrainian "junk websites".

Both groups of investigated media wrote about early parliamentary elections. Manipulative materials related to the "Servant of the People" party, paid a lot of attention to the parties of Vakarchuk and Poroshenko, they were presented as revanchist. Media from the occupied territories represented an election campaign as a circus - another symptom of the "total decline" of Ukraine.

Statements by pro-Russian politicians and lawyers, and deputy chairman of the Presidential Administration of Yanukovych, Andrei Portnov, who after Zelensky's victory returned to Ukraine, gave the opportunity to sites from the occupied territories to promote the topic of "Kyiv regime crimes" of Poroshenko. In addition to the statements of Portnov, "junk websites" recounted the story of the "situation room of the NSDC", from which Poroshenko's team took monitors and servers (in fact, in the NSDC situational room all the equipment in place, it disappeared from the situational room at the Presidential Administration. Representatives of Poroshenko claim that equipment was leased).

This topic of "theft" of displays by Poroshenko coincided with the topic of "toxicity" of his encirclement. This is the case when current events are used to promote the old Kremlin narrative about the total corruption of the Ukrainian political class.

To illustrate the seven most popular topics we choose several titles which represent the topic:

Military delighted with Zelensky: what happened?

In the LPR honored the memory of those killed in the airstrike of the Air Force of Ukraine in the Lugansk administration (media of occupied territories).

The corpse lay for half a year at the positions of the Armed Forces of Ukraine: a punishers killed a resident of the LPR (VIDEO). (media of occupied territories)

The incident with the child revealed a whole "home arsenal" of the bin of "JFO" (media of occupied territories).

. Zelensky: the president of the war, the incompetent head of the failed state, a possible referendum on peace.

Chance for new power. What will happen to political prisoners in Ukraine under Zelensky (media of occupied territories)

Zelensky reassured Ukrainians: the referendum will be.

"It's a shame!" In the decree of Zelensky found a bunch of mistakes. Photofact.
Lisa Bohutskaya: Friends. It's been only a week. And work to discredit

3. Ukraine is unnecessary to the West, not needed as such, friendship with Russia

A big secret deal between Putin and Trump: where is Ukraine here?

Surprisingly, but many still believe that the collective West wishes Ukraine good.

It seems that someone doubted that the Russian Federation has the ability to block the flow of energy to Ukraine? (media of occupied territories)

What is the West really ready to do for Ukraine? (media of occupied territories)

Running from Europe: Ukraine made a rapid jerk back (VIDEO) (media of occupied territories)

4. Issuance of Russian passports in the Donbass

Specific objective: Russia plans the joining of “LPR” and “DPR”.

Volker: Donbass will follow the way of Crimea (media of occupied territories)

From 7 to 14 thousand: in Telegram called the cost of bribes for obtaining passports in the DPR (media of occupied territories)

5. "Crimes" of Poroshenko, state treason, escape from the country

People caught Poroshenko in the center of Kiev. Nobody expected such a turn. Video.

Portnov threatens to arrest all Poroshenko’s assets, including those registered on figureheads.

Poroshenko urgently packs his belongings: what is happening?

Nothing will help Poroshenko - Portnow.

Will the time come to plant Petrushka? (media of SDDLA) [note: in the title used the paronomasia. The word “plant” in Ukraine mean the planting of vegetables or fruits, and imprisonment process. “Petrushka” is an Ukrainian form of word “parsley”, and in this context hints at Poroshenko - “Petrushka” formed from the name "Petro"]

6. Poroshenko is a thief, inflating of the story about "situation room"

Lisa Bohutskaya: Poroshenko did not do anything at his own expense. Why he’s not in handcuffs yet through the case with servers? Spring has passed ... when to plant? [note: the same paronomasia associated with planting process, which in Ukraine start in the spring. In this context mean imprisonment process]

Zhlobovnik Poroshenko)... [the same note as in previous title]

Poroshenko acted with Ukraine as a colonizer.

Servers missing from the NSDC were found in Russia. (media of occupied territories)

Legoida: Fanar is not able to resolve the situation around Orthodoxy in Ukraine.

Archpriest Vladimir Puchkov: “Be careful, there is no Christ there!”

How Filaret wiped his feet on Bartholomew. (media of occupied territories)

Riot against the "boys". The head of the Kyiv Patriarchate Filaret is preparing the overthrow of Epiphanius. (media of occupied territories)

Methodology
We searched for the topics in 1883 manipulative news in Russian from 18 propaganda sites and 18 Ukrainian "junk websites", totally 36 sites.The manipulation in the news was determined by an improved machine learning classifier from Texty’s project "We've got bad news!"

The project is funded by the National Democratic Institute