The trend, which in the last local elections has led to the increase of the number of votes for "pro-Ukrainian" parties has started in 2014. Russian propaganda has distracted the residents of Donbas on the activity at the elections - TV aggressor for the long time has convinced that the Ukrainian government is illegitimate. Also the citizens felt frustration of the party that held monopoly power in the region - the Party of Regions.

People do not want to support those who has led the region in recent years and brought it to a critical state. In addition, total political domination of the Party of Regions formed the view that going to the elections makes no sense - everything is already decided instead of people.

After the Russian aggression and the liberation of many cities in Ukraine Donetsk patriots met each other, began to communicate more, join in community organizations and volunteer associations. This category of citizens is more socially active, that is why their voice becomes more visible.

Where pro-Ukrainian initiative could form an effective party structure - we see radical crush of votes for pro-Ukrainian forces. The best example: Novogrodovka - where party "Democratic Alliance" and "Party of Motherland Defenders" were active in their campaigns and received 15 and 25 percent respectively. And those who rely only on the famous party brand (at national level) but has conducted the local campaign languidly could not get to the local councils.

Unfortunately, it could not get without "Trojan horses". That is, voters vote for party X, as an expression of confidence for Ukrainian center powers but new deputies who got into the council vote with former Party of Regions members. There are powerful clans in Donbas who try to take control of the party ratings. Therefore, not all deputies who were in pro-Ukrainian parties can meet the expectations of voters. 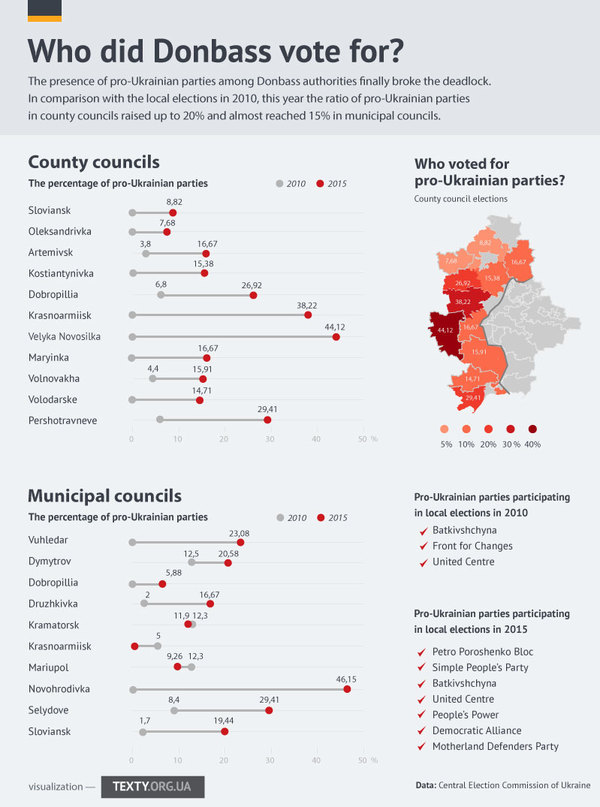